5G wireless networks are being touted as one of the greatest technology advancements to reach modern electronic communications, making use of signal carrier frequencies below 6 GHz, as with earlier wireless communications generations, but also reaching well into mmWave frequencies for short-haul, high speed data links. Printed circuits for such a wide range of frequencies require special circuit laminates. RO4730G3™ laminates from Rogers Corp., for example, offer outstanding performance from RF through mmWave frequencies.

However, a difference between this type of laminate and more traditional circuit materials, and a cause for concern among some circuit designers, is the use of hollow microspheres in substrate fillers. Because of the microspheres, the appearance of micromachined circuit features, such as PTHs from one conductive copper layer to another, can appear much rougher than PTHs in more traditional circuit materials without these fillers. Are looks deceiving or is the concern warranted? Extensive testing, summarized in this article, has shown that the impact of microsphere fillers on PTH surface roughness is purely cosmetic and does not affect circuit performance.

The wall surfaces of all PTHs can vary in texture, even when comparing the roughness of wall surfaces in the same laminate. Wall surface roughness varies from hole to hole simply due to multiple factors involved in the drilling process. In a material with microsphere fillers, for example, a drill may or may not impact a microsphere. When the drill impacts and fractures a hollow sphere, copper plating for that PTH follows the contour of the opened sphere and the PTH wall is not smooth and flat (see Figure 1). It is only natural to question whether the roughness translates to compromised electrical performance or reliability compared to a more traditional circuit laminate in which PTHs are smoother in appearance. In general, and for traditional high frequency circuit materials not using microsphere fillers, a rough wall surface can indicate a problem in the PCB fabrication process, with a concern for PTH reliability. For circuit materials with hollow microsphere fillers, however, PTHs with rough surfaces are normal and are not indicative of poor performance. 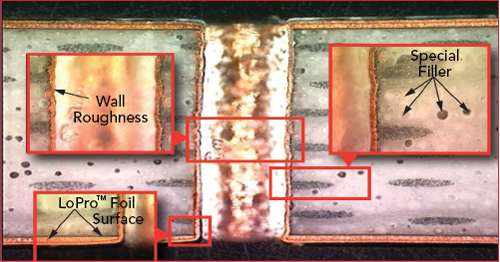 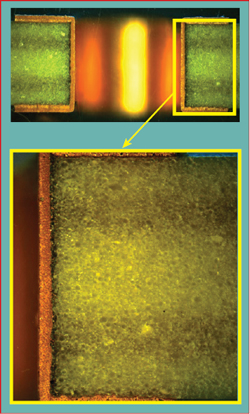 Differences in PTH surface roughness of the two materials shown in Figures 1 and 2 are clear, but will this affect RF performance? For a test vehicle, a microstrip transmission line provides an effective means of comparing the effects of smooth and rough PTH wall surfaces on otherwise similar circuit materials, since PCB fabrication variables for microstrip have less impact on RF performance than for other high frequency transmission line formats. The microstrip circuits for these tests (see Figure 3) were designed with the goal of achieving good results up to 40 GHz.

Figure 3 Standard microstrip transmission line (a) and test circuit with PTH transition (b), used to evaluate the effect of PTH surface roughness on RF performance.

The “standard” microstrip transmission line, shown in Figure 3a, has grounded coplanar waveguide (GCPW) structures at the ends to launch to the 2.4 mm coaxial connectors (model #1492-04A-5 from Southwest Microwave). Figure 3b shows the top and bottom layers with a PTH in the middle to provide a transition between layers. The 2 in. test circuit is a loosely coupled GCPW transmission line to have similar RF performance to the microstrip “standard” transmission line. Loose coupling enhances performance at higher frequencies and is a good fit for this test vehicle through 40 GHz.

A number of circuits of the same design were fabricated from the same material panel to evaluate RF performance differences resulting from normal material variation and the effects of PCB fabrication process uncertainties. The original panel, measuring 24 in. × 18 in., was cut into two panels, each measuring 12 in. × 18 in., so that material consistency was maintained across the different test circuits. The same fabrication and test process was used for both circuit materials, the 20 mil thick RO3003G2 circuit material with smooth PTHs and the 20.7 mil thick RO4730G3 circuit material with rougher PTHs.

A large amount of data was collected including insertion loss, return loss, impedance, group delay and phase angle. Figure 4 shows vector network analyzer screen shots of a sample of the test circuit in Figure 3b, with results in both the frequency and time domains. From Figure 4a, |S21| is 3.93 dB at 39 GHz, per marker 2. In Figure 4b, marker 1 shows that |S11| and |S22| at 40.7 GHz are better than 14.83 dB. Using time domain reflectometry, Figures 4c and d show the impedance in the body of the test circuit: approximately 48 Ω at markers 1, 2 and 3 in the PTH transition. Small impedance anomalies can be seen in the transition areas, although these are less than 2 Ω and have little impact on RF performance. This circuit is considered to have a good transition from top to bottom signal layers. 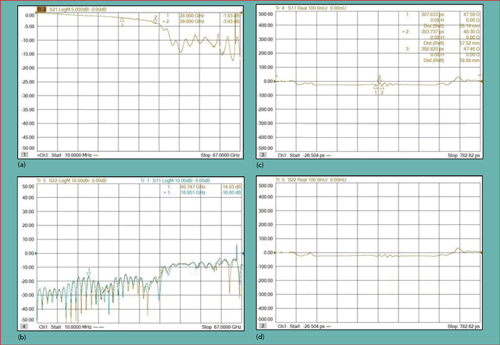 These through measurements show the effects of a PTH transition from one copper layer to another. Microstrip and loosely coupled GCPW circuit impedances are influenced most by substrate thickness versus conductor width, variations in copper thickness and substrate Dk. The impedance in the PTH area is impacted more by these variables than any variation in the wall surface. For this reason, impedance was not used to gauge the effects of PTH wall surfaces on RF performance, although the data was collected.

Since surface roughness of a conductor along a microstrip transmission line affects the phase angle of a signal passing through it,1-2 through measurement phase is a sensitive measure of the RF signal path through the PTH. Repeatability measurements on one test circuit determined the S21 phase angle within a standard deviation of ±1.2 degrees at 39 GHz. For this measurement, S21 phase angle is the unwrapped phase angle, an absolute value summation of the −180 to ±180 degree phase. This is meaningful resolution for 5G frequencies at 39 GHz, where lower frequencies are less sensitive to phase variations. For a 2 in. long microstrip transmission line on a substrate with a Dk of about 3, the phase angle range is thousands of degrees at 39 GHz, so that suitable phase resolution is provided by the test circuits and this measurement approach.

Summarizing the results, Table 1 shows data for six different circuits of the same design fabricated using one panel of RO3003G2 substrate material and compared, for reference, to a microstrip transmission line without a PTH. The table also shows data for six different circuits of the same design fabricated on a second panel of substrate material, where the two panels were originally cut from the same piece. The circuit ID indicates which panel the circuit came from and the circuit ID on that panel. For example, P1C4 is from panel 1, circuit number 4. To ensure consistency, circuits were separated from each other and evenly covered the panel. Some differences, due to factors such as conductor width variation, copper plated thickness variation and drilled hole quality were from PCB fabrication tolerances rather than PTH wall roughness. In addition, tight gaps around transitioning PTHs exhibited some variation due to normal PCB fabrication tolerances. Also, there were minor material variations across each panel, such as slight differences in Dk. Considering these uncertainties, repeatability of the phase data is within ±1.2 degrees at 39 GHz. 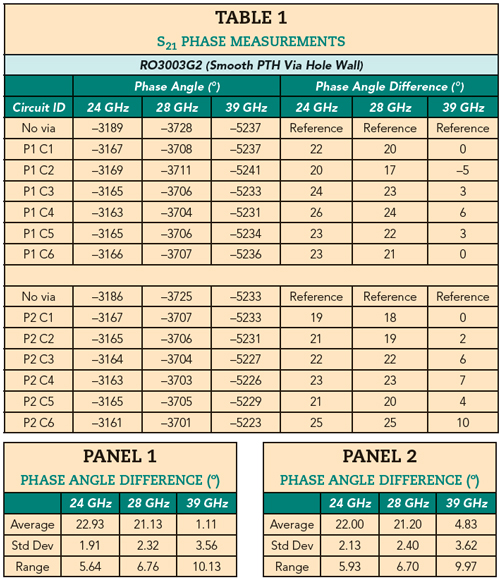 Although not a factor in these measurements, the Dk tolerance of the RO4730G3 circuit material is within ±0.05. At higher frequencies, however, even slight Dk variations can sometimes be noticeable: at 39 GHz, for example, a Dk shift of 0.05 will cause a change in phase of about 15.3 degrees. For a tolerance of ±0.05 or total Dk shift of 0.10, the phase angle at 39 GHz could change by as much as 30.6 degrees due to Dk variation alone. This is good to keep in mind when considering the phase angle variation shown in Table 1. Because the same original panel of material served as the source of panels for the PTH evaluations, variations in phase angle due to Dk variations can be expected to be minimal. 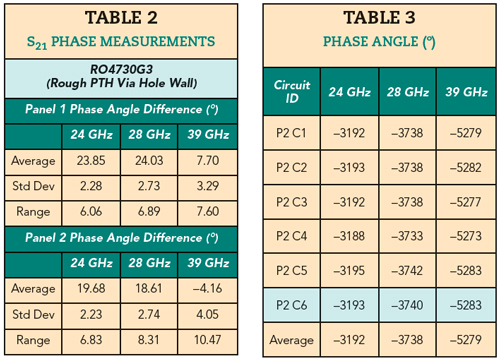 Table 2 shows the phase difference average, standard deviation and range from the circuits fabricated with the RO4730G3 laminate, which has the rougher PTHs. The statistical differences between the RO3003G2 and RO4730G3 laminates can be seen by comparing Tables 1 and 2. As noted, every attempt was made to minimize variations due to the material, with material panels 1 and 2 in each case coming from the same starting panel. Comparisons of phase angles and any differences are principally due to circuit fabrication effects. When analysis of the results is restricted to a single panel, phase angle differences are minimally influenced by PCB material variations. Each panel exhibits some variation in S21 unwrapped phase angle, but the variations are not significant between the two different materials. 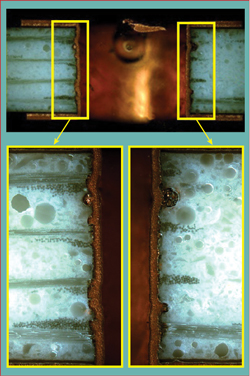 Figure 5 Close-up photographs of the side walls of a PTH fabricated with 20 mil RO4730G3 laminate.

Visibly, using microphotographs, the PTH surface walls appear quite different. For example, Figure 2 shows the PTH of ID P1 C1 fabricated on 20 mil thick RO3003G2 laminate, with a smooth PTH wall surface. ID P2 C6 (see Figure 5), fabricated on 20.7 mil thick RO4730G3 circuit material, has a rougher PTH wall surface. Judging by appearance alone, there might be some cause for concern regarding PTH wall surface roughness on RF performance; however, these and other tests have shown that, with respect to the test vehicles considered, differences between rough and smooth PTH side walls are only cosmetic, with no apparent impact on RF/microwave/mmWave performance, at least through 40 GHz (see Table 3).

The information reported in this article is a small sample of the data collected testing circuit materials with smooth and rough PTH transitions. The purpose of these tests was to demonstrate the effects of PTH surface-wall roughness on RF performance at mmWave frequencies; they demonstrated that the different appearance between rough and smooth PTH side walls is only cosmetic and has no adverse effect on RF, microwave and mmWave performance through 40 GHz.n