Strategy Analytics forecasts global defense spending will continue to grow, driven by force modernization requirements and political intent in the U.S., Western European and other advanced nations. A need to counter both resurging conventional threats from near-peers, coupled with ongoing asymmetric wars against non-state or pseudo-state actors, will drive military equipment and capability and support procurement opportunities for the defense industry supply chain to a forecast of $827 billion, part of the projected $2.58 trillion global defense budget in 2027 (see Figure 1).

The U.S. will remain the largest defense market in the world. Strategy Analytics’ model forecasts U.S. defense spending will grow to $866.6 billion in 2026. The emphasis by the Trump administration to renew U.S. leadership across the world was reflected in the fiscal year (FY) 2018 budget and has been further cemented by the most recent FY 2019 budget request: $686 billion for the U.S. DoD with a number of major warfighting investments across airborne, naval, ground and space platforms and systems (see Figure 2). This will maintain momentum behind the U.S. defense industry, sustaining growth for major suppliers like Boeing, General Dynamics, Lockheed Martin and Raytheon, as well as the enabling technology supply chain epitomized by companies such as Microsemi, Qorvo, Teledyne and Wolfspeed. 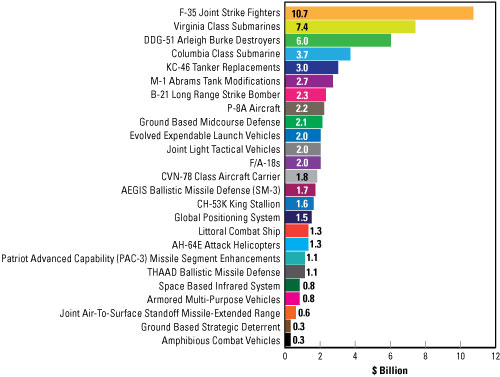 Globally, an emphasis on improved capabilities at the system level will drive demand for military radar, military communications and electronic warfare (EW), and capabilities will continue to provide opportunities for enabling technologies such as GaN.

Suppliers of military radar systems are increasingly implementing AESA architectures at the core of their product offerings, highlighting advances in performance as well as lifecycle and total cost of ownership advantages over traditional radar designs. An AESA radar comprises a large number of transmit-receive modules that feed and collect multiple signals via an antenna array. Potential advantages of an AESA architecture include high beam steering agility, very low radar signature when illuminated and extremely low side lobes. Being able to digitally control transmit-receive module gain allows for refined power management, which is vital for reduced or low probability of intercept (RPI, LPI) operation. Beam steering agility also facilitates reduced or low probability of intercept scan patterns. From an operational perspective, the implementation of AESA architectures in military radar systems enables improvements in system reliability and reductions in total cost of ownership. Use on fast jet platforms is often cited as a good example where these metrics are best exemplified with mean time between failures being improved significantly from the 300 hours typically cited for conventional radar systems. Coupled with “graceful degradation,” where a radar system continues being functional even as individual transmit-receive modules fail, means that aircraft can stay operational with repairs being performed alongside the regular maintenance schedule of the platform.

The core enabling semiconductor technologies for AESA architectures have typically been GaAs-based, but as GaN technology has matured, the defense industry has looked to GaN as the new core enabler for AESA-based military radar. GaN offers the advantages of increased power, efficiency and robustness to improve the performance of land-, air- and sea-based military radar systems. This does not mean that GaAs technology will no longer be used, any more than it would be unwise to suggest that there will no longer be demand for vacuum tube-based RF transmitters. However, GaN does arguably offer the added flexibility of being able to displace GaAs, other RF semiconductors and vacuum tube technologies as the RF transmitter source in radar systems. With these advantages, GaN is becoming a key enabling technology and military radar demand for GaN is forecast to grow at a CAAGR of 19 percent through 2027.

Figure 3 Forecast share of the military radar market, by region.

Operational requirements to establish freedom of action in contested and congested environments, as well as the ability to counter modern agile radar and communications will drive opportunities for the EW market. There is a renewed push to upgrade conventional EW capabilities that support anti-access/anti-denial (AA/AD) strategies. This will be coupled with the ongoing requirement to combat asymmetric threat scenarios. Future systems will employ wideband solid-state semiconductors to enable artificial intelligence (AI)-based machine learning algorithms to provide cognitive analysis of the threat environment. EW will play an important role in tackling the increasing complexity that comes with operating in a spectrally constrained environment.

Companies providing systems and enabling technologies will need to focus on solutions that employ wideband materials, such as GaN, and AESA architectures to enable machine learning-based cognitive analysis, planning and countermeasures activity that can either augment or circumvent the traditional threat library.

Strategy Analytics forecasts the global EW market will grow to $20 billion by 2027 (see Figure 4). The associated market for semiconductors and other components for RF-based EW systems will grow at a CAAGR of 8.4 percent through 2027. Future EW program will increasingly use GaN, making this semiconductor technology a staple ingredient in EW systems. This will be coupled with requirements for direct and faster digital synthesis of RF signals across the full frequency spectrum.

Military communications operate under an umbrella of heterogeneous networks that enable the provision of interoperable voice, video and data services across a global environment, segmented according to security policies, transmission requirements and the individual needs of the end user. In terms of the networked battlespace, this can be summarized as:

Similarly, 5G serves as an aggregator technology that encompasses a range of network types and technologies to serve traditional voice, video and data requirements to the end user, as well as enabling capabilities for connectivity across devices, including vehicles, machines, sensors and devices.

Phased arrays, beamforming, mmWave frequencies, SATCOM, GaN, duplex communications and shared spectrum access are among the crossover technologies that will become common across both commercial and military communications.

Communicating voice, data and video simultaneously and securely over wider and higher bandwidths in an increasingly complex spectrum environment will underpin the trends in military communications system design and supporting components, including software-defined architectures, solid-state technologies such as GaN, radio-satellite communications and integration with wireless networks.

Strategy Analytics forecasts spending on global military communications systems and services will grow to over $36.7 billion in 2026, a compound annual growth rate of 3.5 percent (see Figure 5).

Demand from military radar, EW and communications applications will provide the primary drivers for GaN market adoption, and this will be coupled with ongoing demand from the rollout of commercial wireless infrastructure. RF GaN market growth continued to accelerate in 2017, with revenues growing at over 38 percent year-on-year.

The military radar segment will remain the largest user of GaN devices for the defense sector. Substantial production activity in AESA radars for land-based and naval systems, in particular, is driving increasing demand for RF GaN, as many systems in development move to production. RF GaN demand from the military sector grew by 72 percent year-on-year in 2017, and this will grow at a CAAGR of 22 percent through 2022 (see Figure 6).

As highlighted earlier, operational requirements to operate in contested and congested environments, as well as the ability to counter modern agile radar and communications, will drive opportunities for RF GaN from the EW market. Communicating voice, data and video simultaneously and securely over wider and higher bandwidths in an increasingly complex spectrum environment will underpin trends in military communications system design and associated component demand, also increasingly favoring RF GaN.

CONCLUSIONSStrategy Analytics forecasts that the total RF GaN opportunity will cross the $1 billion barrier by 2022, with defense sector demand slightly greater than commercial revenue at that time.

As countries look to maintain a mix of both conventional and leading-edge capabilities, to counter both symmetric and asymmetric threats, global defense spending is forecast to reach $2.6 trillion by 2027. The emphasis on improving capabilities at the system level will drive demand for military radar, EW and communications systems and provide growth opportunities for enabling technologies such as GaN.

Companies will need to be able to “scale, integrate, incorporate and disrupt” to differentiate themselves in addressing the challenges and opportunities in the defense sector, as well as exploiting adjacent market growth opportunities benefiting from these same capabilities.