For well over a century RF technology has been understood in sufficient detail for the design of basic communications systems. The application of RF to radar began in the 1930s and accelerated during World War II, driven by the pressing needs of the major war effort.

In both instances–communications and radar–electronic vacuum tubes (or “valves”) formed the active devices. What changed the entire electronics scene forever were the pivotal inventions of the transistor in 1947 and the integrated circuit in 1958. Key developments in microwave integrated circuits during the 1950s (right up to the present era) ensured continuous progress for solid-state RF technology. Twenty-first century RF systems exhibit the following trends: they are increasingly digital, increasingly software-based and almost entirely solid-state. At the systems level software-defined radio (SDR) is now at a high level of maturity and cognitive systems (radar and radio) are under development.

The overall physical dimensions of critical components and devices involved in communications systems and radars embrace an extremely wide range, from massive communications “towers” and phased-array radars all the way down to the nanometer-scale semiconductor devices involved in the electronics. Between these extremes there exist many types of modules and subsystems that perform specific signal-processing functions. Semiconductor devices form the critical technologies for all systems and therefore such devices form the initial considerations.

Back in the 20th century it was almost unheard of to even remotely consider CMOS for RF applications because the highest speeds possible precluded such considerations. However, as MOS transistor feature sizes continued to shrink (and therefore operating speeds increased) so the possibilities of at least low-power microwave applications began to look feasible. Nowadays RF CMOS is well established for many microwave applications–especially where very densely-packed mixed-signal RFICs are concerned. The basic CMOS logic inverter represents an important example of how two contrasting types of MOS transistor are interconnected to form a fundamental type of circuit configuration, shown in Figure 1.1 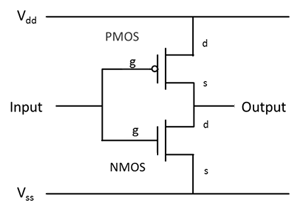 RF CMOS and its derivatives now represent a mainstream RF technology that can be adopted for the relatively low-power portions of MMICs/RFICs.

In order to increase the operating speed (hence also frequency) it is also possible to add one or occasionally two bipolar transistors to a CMOS circuit stage. Where such a BJT is NPN type then the base is often doped with germanium (Ge)–which serves to shrink the bandgap substantially. This silicon-germanium alloy is always termed “SiGe” and the resulting overall technology is: SiGe BiCMOS.1

Compared to silicon alone, the addition of Ge:

SiGe BiCMOS technology is extensively and increasingly being adopted for RFICs going into high-volume applications such as automotive radars.

Some 130 nm SiGe BiCMOS transistors operate close to 1 THz. But a serious disadvantage is the very low breakdown voltage of typically around 1.7 V.

Adding BJTs to CMOS requires high-level multi-masking fabrication which is relatively expensive and is certainly not cost-effective for low-to-moderate production runs.

The GaAs HEMT and PHEMT

The acronym "HEMT" stands for: High Electron Mobility Transistor. In a HEMT the channel is effectively a quantum well. And a quantum well is a depletion region within an undoped GaAs layer that has been created by a heterogenous junction made using highly doped GaAs-based semiconductor materials. For example this heterogenous junction could be P-N where both the P and N regions are highly conductive. The channel is referred to as a two-dimensional electron gas (referred to as “2-DEG”) in the channel beneath the gate and it has a very high conductivity. These effects can be greatly enhanced by ensuring the doped and intrinsic layers possess slight crystal lattice mismatches. This situation is defined as “pseudomorphic” and it gives rise to the term “PHEMT”, hence a GaAs pseudomorphic HEMT or GaAs PHEMT. These properties lead to very high frequency operation–well into the mmWave bands.

The wide bandgap semiconductor know as gallium nitride (GaN) is a truly revolutionary compound material–particularly notable for its application in RF electronics technology. Transistors based upon GaN, specifically the GaN HEMT provide exceptional characteristics for power and also low-noise applications. A cross-section of such a transistor is shown in Figure 2. 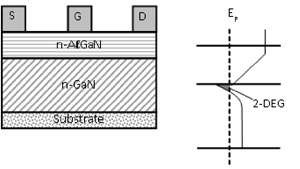 Figure 2 Cross-sectional structure and energy-level diagram for a GaN HEMT.1

GaN HEMTs are manufactured either on silicon or on silicon carbide (SiC) substrates. SiC provides an excellent heat sink which is important for power devices.

It is also possible to replace the n-GaN layer by n-AℓN (aluminium nitride) but this will not be elaborated upon further here.

GaN HEMT transistors tend to demand relatively high-voltage supplies, such as 40 V or more. They are mainly oriented toward medium-to-high power requirements and–as discrete devices with efficient heat sinks–can deliver in the order of many hundreds of Watts continuous-wave (CW) at relatively low microwave frequencies such as L- or S-Band.

Many GaN HEMTs are designed for use well into mmWave–particularly small-signal devices. And most of these types of transistors form the major “process” in MMICs of various types. GaN HEMT developments in relation to distributed amplifiers are considered in detail by Ghavidel et al.2 GaN technology is now becoming common across almost all RF applications. In particular active electronically-scanned array (AESA) radar modules increasingly adopt GaN technology.

There are some arguments regarding the strict applicability of each terminology but the outcome is largely academic and will not be followed-up here. The MMIC abbreviation conveniently pronounces “M(i)MIC.”

Unlike integrated circuits designed for digital subsystems (ICs or "chips"), those designed for RF or microwave applications cannot merely comprise the transistors–interconnected by conductor arrays. Instead a combination of semiconductor devices (diodes and transistors) and passive circuit elements is required. The final MMIC may embody a specific microwave circuit function such an amplifier or a mixer–or it may comprise a much more comprehensive subsystem.

In most instances (although not exclusively) the more comprehensive MMICs tend to be those realized using either RF CMOS or SiGe BiCMOS technologies. The economic case is particularly strong where high-volume manufacture is the case. Major manufacturers of these more comprehensive chips offer fully integrated subsystems that include several ADCs, several DACs–and many further “sub-circuits” all on the same chip.

Specific MMIC design approaches require the initial choice as to the transistor technology that will be implemented. This is always referred to as the “process.” It means that a specific manufacturer (a “foundry”) will for example operate a publicized GaAs PHEMT “process” or a GaN HEMT “process”–for example.

Figure 3 10 W MMIC Chip (with acknowledgement to Paul Khanna and Transcom Inc. for permission to reproduce this image).

A photograph (see Figure 3) in article by Paul Khanna3 is a MMIC chip capable of 10 W of output microwave power (Transcom Inc. as well as Paul Khanna are thanked for their permission to reproduce this image). As well as diodes and transistors, air-bridges, capacitors, inductors, resistors and Lange couplers are all regularly realizable on-chip.

Densely-packed mixed-signal RFICs enable combinations of analog (RF) and digital circuitry to be created on the same chip. Thus ADCs and DACs, for example, are simultaneously processed on-chip. In particular time-interleaved ADCs (particularly important in microwave systems) can be co-processed.

These ADC architectures implement a range of “m” parallel “sub-ADCs” and each sub-ADC samples the incoming signal at every m’th cycle of the system clock. This arrangement causes the sample rate to be increased by a factor of ‘m’ compared to the sampling rate capability of each individual sub-ADC. Time-interleaved ADCs are therefore usually very fast indeed–enabling GHz operation.

In a TI ADC each consecutive “sub-ADC” is clocked by a successively delayed clock waveform.

Most “phased-array” antennas comprise flat-panel or “patch” arrays which are often based on microstrip transmission line configurations. Otherwise various conducting patch structures are frequently implemented and complete, packaged versions of such antennas take on physical dimensions very similar to those of commercial indoor Wi-Fi hubs.

These types of antennas can provide gains up to about 20 dBi and they are generally installed onto indoor walls. A center frequency of 2.4 or 2.7 GHz usually applies to such antennas and a straightforward flexible coaxial provides the output line carrying the intermediate-frequency signal.

Beamforming represents a major requirement for many types of systems implementing phased-array antennas (5G is an important example). Massive input/massive output (MIMO) systems are being put forward as potential candidates for several new types of communications systems. Beamforming–both analog and digital–forms a vital part of this approach principally applicable to radars or to prospective 5G systems. Hybrid beamforming is a combination of analog and digital beamforming and the principle is indicated in Figure 4.

Figure 4 Architecture of a hybrid beamformer.

With the hybrid beamformer system adaptive weighting is available in both analog and digital domains. As a result there is optimization between both coverage and capacity.

Multi-element MIMO arrays are feasible with element counts up to at least 64. Operation to at least 30 GHz has been demonstrated.

It has long been recognised that phase noise represents a major issue for frequency sources such as oscillators and frequency synthesizers. More recently it has also been appreciated that this phenomenon is important for low-noise amplifiers. Phase noise (especially close-in to the carrier) represents a very important quantity in amplifiers designed for sensitive requirements. For a fundamental crystal-stabilized oscillator the phase noise even as close as 100 Hz from the carrier (typically 100 or 140 MHz) can be as low as -144 dBc. However the phase noise for most other types of frequency source is more like -70 dBc, even at frequencies much further removed from the carrier, e.g., 10 or even 100 kHz away.

These ADC architectures implement a range of “m” parallel “sub-ADCs” and each sub-ADC samples the incoming signal at every m’th cycle of the system clock. This arrangement causes the sample rate to be increased by a factor of "m" compared to the sampling rate capability of each individual sub-ADC. Time-interleaved ADCs are therefore usually very fast indeed.1

In a practical system physical differences between the sub-ADCs degrade the overall performance but provided the system is integrated (RFIC) such differences are generally negligible. Delays are of the order of ns. Equivalent numbers of bits (ENOB) are typically in the range 4 to 6 and TI ADCs can operate at frequencies well into the GHz range.

For further details concerning time-interleaved ADCs the references5-7 are recommended.

Spread-spectrum modulation (also known as code-division multiple access or CDMA) is a particularly important form of digital modulation. The term “spread-spectrum” arises from the fact that with this technique the digital signal is spread over a relatively wide bandwidth but at a lower level of RF power. Another more complete name for this approach is direct sequence spread spectrum (DSSS).1

The digital input signal input comprises the digitized and compressed (analog) voice waveform and this is fed to one input of the exclusive-OR (XOR) gate. What is known as a “chipping” signal is fed to the second gate input. The data rate of this chipping signal is two orders of magnitude higher than that of the digital signal input.

Numerical details of this system follow what is known as the CDMA IS-95 standard which uses a chipping signal at 1.2288 Mbit/s and a digitized and compressed (originally voice) signal running at 13 kbit/s. Potential recipients of spread-spectrum signals require knowledge of their specific codes in order to receive (decode) the signals meant specifically for them.

Twenty-first century RF systems–communications and radars–rely heavily on semiconductor devices: both discrete and integrated (RFICs or MMICs). The principal trend is toward silicon technology (mainly RF CMOS but also SiGe BiCMOS). However technologies such as GaAs PHEMT remain important for designing circuitry capable of operating well into the mmWave frequency bands (e.g., for 5G). GaN HEMT technology has gained acceptance for a wide variety of RF applications. For many years this technology principally applied to relatively high-power circuits such as RF power amplifiers but is now also entering applications such as LNAs. Active electronically-scanned array (AESA) radar modules increasingly adopt GaN technology.