WIN Semiconductors, the world’s largest GaAs foundry, reported strong second quarter and first half year-over-year revenue growth driven by the handset market. However, the company said “inventory corrections” across all markets will cause third quarter revenue to decline around 10 percent compared to the second quarter. 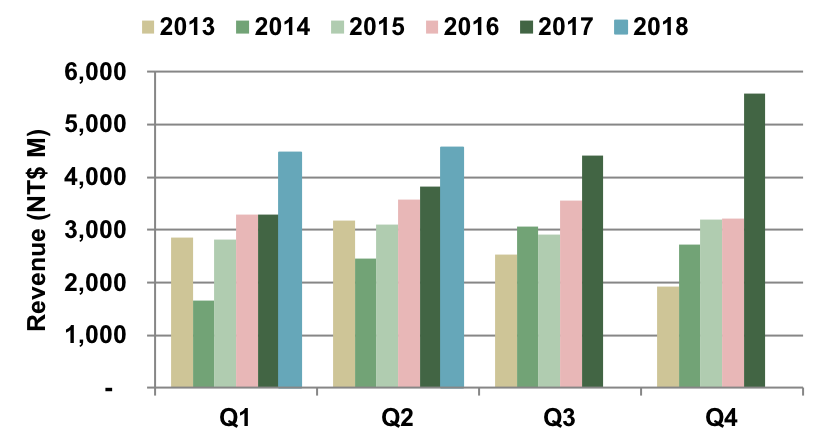 However, net income increased almost 24 percent sequentially and year-over-year, which WIN said reflected the favorable foreign exchange rate with the U.S. Earnings per share (EPS) was NT$2.16, compared to NT$1.74 in the first quarter and NT$1.85 in the prior year’s quarter.

Fab utilization was approximately 85 percent during the quarter, the same as the prior quarter. WIN invested NT$1,453 million in capital during the quarter to increase fab capacity, yielding negative free cash flow. During the first quarter, WIN invested NT$1,760 million. WIN plans to expand capacity by the end of the year, although the company said it may delay expenditures given market softness.

During the earnings call, WIN said it is seeing softness — which it characterized as an inventory correction — with several customers and all segments, although the cellular market is not down as much as the other markets. The company estimates the gross margin percentage in the third quarter will be in the low 30s, and the softness may reduce fab utilization.

To diversify beyond RF/microwave applications, WIN has been developing optoelectronic process technology for photodiodes and laser diodes, targeting the growing 3D sensing market. WIN’s 3D sensing revenue, which is reported in the “others” category, represented some 10 percent of total revenue in 2017 and may grow to between 15 and 20 percent this year, according to company comments during the earnings call.