Visualize a rope tied to a door handle. If you take the untied end in your hand and flip it up and down once, you will see a “wave” going down the rope to the door. If the door and the rope were completely compatible, the wave would disappear into the door. But, as we all know, the wave does not disappear, it comes right back to you. (As a matter of fact, if you do not pay attention to what you are doing, the rope will flip right out of your hand when the wave returns). That is the same condition for an RF signal or a microwave signal as it travels down a transmission line. If the wave goes down the line and the impedance of the load is exactly equal to the characteristic impedance of the transmission line (usually 50 ohms), the signal is completely absorbed into the load and no energy is returned. This is a perfectly matched condition (i.e., VSWR = 1.0:1). If the load impedance is not equal to the characteristic impedance of the transmission line, a portion of the signal sent down the line is reflected back. That signal adds to the incoming signal in some cases and subtracts from it in other cases. This is a property of linear systems called ‘superposition’. The result of the addition and subtraction is a wave that “stands still” on the line, thus the term voltage standing wave ratio. It is called a ratio because it is the comparison of the maximum amplitude of the voltage in the standing wave (anti-node) to its minimum amplitude (node) (see Figure 1). 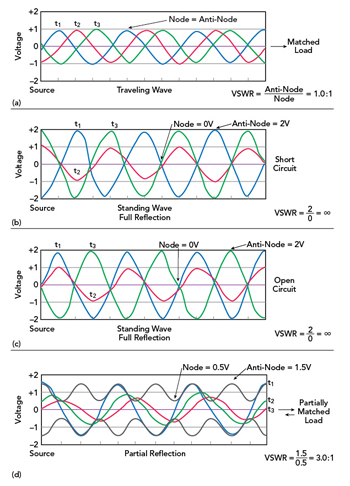 This is an important measure because energy in a microwave system is transferred through traveling waves. Reflection impedes the forward flow of energy from a source to a load and is normally undesirable. A familiar example is the use of a microwave oven for cooking. In normal operation, much of the energy from microwave radiation generated by a magnetron is absorbed by the food placed within the oven’s cavity. Reflections are minimized because the food provides a suitable impedance match. If, however the oven is operated with no food item present, the energy is reflected off the conducting walls and back to the source, creating standing waves. The standing waves create regions of large voltage peaks that can cause arcing and damage to the magnetron.

Since the comparison is between voltages, the VSWR value has no units and it is a ratio compared to 1. The best value is a 1.0:1 ratio. That means the load and the transmission line are the same impedance. The other extremes are an open circuit and a short circuit. With an open circuit, virtually all the energy sent down the line is reflected back because it has no other place to go. Theoretically, all the energy is reflected. In practice, a small amount is radiated out the open end of the line. A short circuit also reflects all the energy sent down the line. That is because no voltage can be developed across a short circuit. So there is no signal to be sent to a load. A short circuit is often desirable. It is a way of knowing the exact location of a component at the end of a transmission line and sets up a reliable reference point for all the measurements that need to be taken; a short circuit represents an extreme case when looking at the VSWR of a device or circuit.

The VSWR for both an open circuit and a short circuit is ∞. That, of course, is the largest theoretical value possible. In practice, VSWRs of 10:1, 20:1, or 25:1 are indications of something like an open- or short-circuit condition. A VSWR of infinity is a theoretical value that in practice cannot be achieved. Everything between an open- or short-circuit condition and a perfect match is a number that is a ratio compared to 1. Those numbers will be between 1:1 and ∞, depending on the degree of mismatch in the system.

It is difficult, if not impossible, to achieve a perfect 1:1 match in a practical circuit. A 1.5:1 or a 2:1 match, is usually sufficient. Some devices achieve 1.2:1 or slightly lower, but that is about as low as one might see in everyday applications. Connectors will exhibit VSWRs on the order of 1.05:1, since the connectors used on a transmission line should minimally influence a circuit’s operation.

That is the fraction of a signal reflected back by the load impedance, and is sometimes expressed as a percentage.

Where the reflection coefficient is the fraction of an incident signal reflected back from an impedance mismatch in a circuit or transmission line, the transmission coefficient is the fraction of the incident signal that appears at the output. It is a function of the signal that is reflected as well as internal circuit interactions. It has a corresponding amplitude and phase, as well. 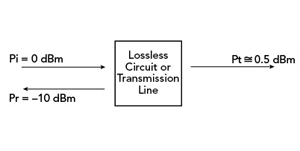 Figure 2 Return loss and insertion loss in a lossless circuit or transmission line.

In Figure 2, a 0-dBm signal, Pi, is applied to the transmission line. The power reflected, Pr, is shown as −10 dBm and the return loss is 10 dB. The higher the value, the better the match, that is, for a perfect match, the return loss, ideally, is ∞, but a return loss of 35 to 45 dB, is usually considered a good match. Similarly, for an open circuit or a short circuit, the incident power is reflected back. The return loss for these cases is 0 dB.

Referring to Figure 2, Pr of -10 dBm means that 10 percent of the incident power is reflected. If the circuit or transmission line is lossless, 90 percent of the incident power is transmitted. The insertion loss is therefore approximately 0.5 dB, resulting in a transmitted power of -0.5 dBm. If there were internal losses, the insertion loss would be greater. 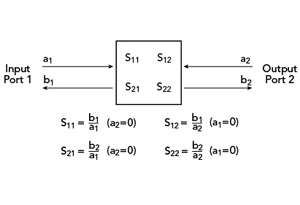 Using S-parameters, a circuit’s RF performance can be completely characterized without the need to know its internal composition. For these purposes, the circuit is commonly referred to as a “black box.” Internal components can be active (i.e., amplifiers) or passive. The only stipulations are that the S-parameters are determined for all frequencies and conditions (e.g., temperature, amplifier bias) of interest and that the circuit be linear (i.e, its output is directly proportional to its input). Figure 3 is a representation of a simple microwave circuit with one input and one output (called ports). Each port has an incident signal (a) and a reflected signal (b). By knowing the S-parameters (i.e., S11, S21, S12, S22) of this circuit, one can determine its effect on any system in which it is installed.

S-parameters are determined by measurement under controlled conditions. Using a special piece of test equipment called a network analyzer, a signal (a1) is input into Port 1 with Port 2 terminated in a system with a controlled impedance (typically 50 ohms). The analyzer simultaneously measures and records a1, b1 and b2  (a2 = 0). The process is then reversed, i.e. with a signal (a2) input to Port 2, the analyzer measures a2, b2 and b1 (a1 = 0).  In its simplest form, the network analyzer measures only the amplitudes of these signals. This is called a scalar network analyzer and is sufficient for determining quantities such as VSWR, RL and IL. For complete circuit characterization, however, phase is needed as well and requires the use of a vector network analyzer. The S-parameters are determined by the following relationships:

IL is related to the circuits transmission coefficients by the relationships

This representation can be extended to microwave circuits with an arbitrary number of ports. The number of S-parameters goes up by the square of the number of ports, so the mathematics becomes more involved, but is manageable using matrix algebra.

These few basic and fundamental measures provide a foundation for understanding the nature and operation of microwave circuits. There are many more measures available to the microwave designer where the functionality and complexity of system require different perspectives. This may include measures for specialized applications such as antennas, oscillators, non-linear amplifiers and frequency converters.