Can Phased Arrays Calibrate on Noise?

The system desire for simultaneous antenna beams in many directions combined with the wireless industry rapidly miniaturizing RF electronics has led to an enormous increase in digital beamforming phased array antenna systems in development. One of the challenges of digital beamforming antennas is the calibrations needed to ensure amplitude, phase, and time alignment between the distributed RF channels. Errors that require calibration include channel to channel amplitude and phase variation across frequency, and also latency variations in digital circuitry that can shift by several clock cycles from power up to power up.  As antenna frequencies increase, the antenna element spacing decreases and physical size allocations for a dedicated calibration injection network becomes problematic.  In these physical space constrained systems any method to provide calibration provisions that does not require added circuitry in the distributed RF electronics is worth considering.

Is it possible that a broadband noise source could be used to calibrate an array of receivers?  Noise has many features that lends it to a calibration waveform. Noise can excite many frequencies simultaneously and is already used in known methods for adaptive filter algorithms. There is also a unique property that the frequency spectrum of the sum of two noise signals shifted in time produces notches in frequency that are spaced at the inverse of the time difference. This property is illustrated in Figure 1. 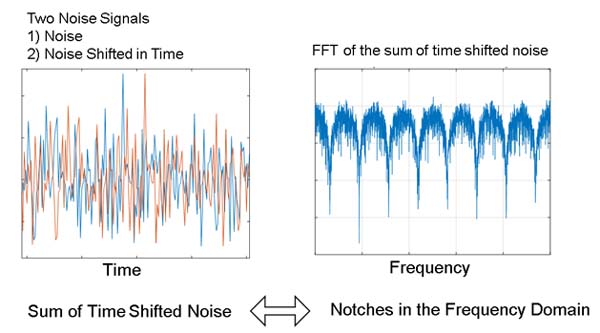 These properties of a broadband noise source provide a mechanism to simultaneously compare receiver channels for amplitude, phase, and time delay mismatches. Next we will illustrate this feature in a measured example.

The concept of calibrating on noise was evaluated with two parallel receivers excited by a common DDS based waveform generator. The test setup is shown in Figure 2. The receivers used were a direct conversion architecture with ADC sampling rates near 250 MHz.

With a broadband noise waveform programmed into the waveform generator, the FFTs from each channel are shown in Figure 3. In this test case, both receivers are excited by a correlated broadband signal well above the receiver noise floor, so the FFTs appear identical.

Figure 3.  FFTs with Noise Injected into the Receivers

Through signal processing, the amplitude, phase, and time delay errors were extracted. The correction filter response for both amplitude and phase are shown in Figure 4.

Figure 4. Magnitude and Phase Response of the Correction Filters

The impulse response of the filters calculated to match the channels is shown in Figure 5. Channel 1 is delayed by 16 samples, and a complex set of FIR coefficients are applied to Channel 2.

Next, to validate the calibration effectiveness, a pulsed 200 MHz linear frequency modulated (LFM) waveform was applied to both receivers. Figure 6 illustrates the results with a time domain view at the pulse start, middle, and end both before and after calibration. The results clearly indicate the calibration was able to line up the pulsed waveforms to be nearly identical across the two channels.

The phased array advancements are forcing very demanding size and power objectives on the RF designers and System Architects.  System cost constraints also force design teams to question the economics of near field testing for the volume of phased arrays entering production in the next decade. These challenges pose a very real need for optimizing methods for efficient antenna calibrations.

Here we merely pose the question, “Can the phased array receivers be calibrated on noise?”, and if so, “Can the noise source be background noise in the antenna environment?” Considerations include an evaluation of the system noise level needed above the receiver noise floor for an effective calibration along with an assessment of the consistency of the background noise in the antenna operational environment. The method described so far only calibrates the receivers. An alternate method for the waveform generators would also be required.  However, once an array of receivers is calibrated, there may be an easier path to loopback the waveform generators to the already aligned receivers.  This might allow a method to simultaneously calibrate all the waveform generators as well.

Phased arrays challenges are not new; in fact phased arrays have been around a long time. What is new is the quest for every element digital beamforming at microwave and millimeter wave frequencies in economic scales that have not yet been produced.  As these systems enter development, the path for innovation and invention on system challenges is wide open. Anyone working in the RF profession has the opportunity to make a lasting difference, take advantage of it.