Growing demand for wireless connectivity and the Internet of Things (IoT) relies more and more on customized antenna solutions optimized for performance, cost and size. Multiple-input-multiple-output (MIMO) is a technique that provides greater throughput and communications reliability, which is desired for many IoT applications. However, MIMO requires multiple antennas on a single device, and ensuring high performance requires not only good antennas, but also high isolation between them. Isolation can be achieved simply by separating the antennas, but doing so can make the device quite large and require external antennas. Between closely spaced internal antennas, high isolation can be achieved by using chokes, matching networks and other techniques, each having advantages and drawbacks. 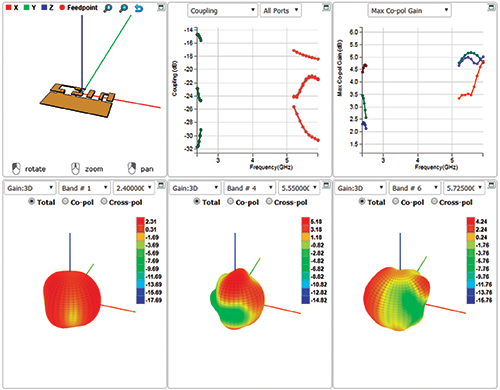 AntSyn combines advanced optimization algorithms, expert systems and electromagnetic (EM) simulation into a user-friendly tool that operates on a “what you want is what you get” principle, where the user inputs the antenna requirements, rather than a parameterized physical design. With AntSyn, the specifications are items like frequency band, target impedance match or return loss, coupling and size or form factor. These are input into the intuitive “spec sheet” user interface, which is automatically organized into a project file. By running the spec sheet, AntSyn returns one or more optimized antenna designs, with the results presented in a customizable dashboard for rapid evaluation (see Figure 1). The user-specified dashboard can be set to view the proposed 3D model and input impedance versus frequency, maximum gain versus frequency, radiation pattern cuts and qualitative star rating, all of which help identify good performers quickly. AntSyn has been used to develop a wide range of antenna types, including single-, dual- and multi-band; broadband and ultra-wideband (>100:1); high efficiency; loaded; electrically small; phased array; wire; patch; conformal; handset; horn; dual-polarized and multifunction.

The latest release of AntSyn has over 35 improvements and 42 new antenna types. Several new features in this release were specifically developed to generate compact MIMO designs, including improved accuracy and features for ground planes, multifunction computer-generated mesh antennas with multiple ports and augmented matching network optimization allowing each port to be separately matched and optimized.

The new mesh antennas are particularly unique and flexible, comprising a set of four new antenna types with either two or three ports.These ports can be independently assigned to different bands that have very diverse RF requirements, such as different polarization, gain pattern and frequency. The antenna mesh is optimized by AntSyn for the given specifications, and the software is sufficiently flexible to essentially invent new antennas. Images of the mesh antennas are shown in Figure 2. The two standard versions of the mesh antenna can be placed on any corner or edge on the ground or in the center, as shown. The ground can be solid beneath the antennas, or it can be an optimized mesh, as well. The coplanar monopole version does not have a ground beneath the mesh; it is expected to project over one edge of the ground, which can be useful in many applications.

The following examples use the coplanar monopole, known to have excellent bandwidth and flexibility, to demonstrate how AntSyn uses these antennas to synthesize high performance MIMO arrays with good isolation and impedance match. Leveraging the new features in the latest release, AntSyn was used to create two- and three-port MIMO antennas on a notional compact device. This notional device had the following characteristics and requirements:


First, a two-port MIMO antenna using the multifunction mesh coplanar monopole type was optimized, using air as its dielectric. The resulting antenna and its predicted performance is shown in Figure 3. This antenna has reasonably good VSWR and isolation for the dual-band Wi-Fi frequencies for both ports, with a maximum VSWR of about 1.8:1 and a maximum coupling of about ‐16.5 dB. At the lowest frequency, the antenna edges are separated by less than 0.093 λ, and the ports themselves are only 0.41 λ apart. As can be seen, the shapes of these two elements have some similarities, but they are not identical. This is expected and improves the isolation.

Figure 3 Two-port MIMO antenna (a) with predicted VSWR (b) and coupling (c).

Figure 4 Three-port MIMO antenna and matching networks (a) with predicted VSWR (b) and coupling (c).

The antenna was imported into NI AWR Design Environment, specifically Microwave Office circuit simulator, and further simulated using AXIEM 3D planar EM solver from 2 to 6 GHz. The results match well with AntSyn’s predictions; the worst-case coupling is ‐16.8 dB. Although coupling and VSWR do rise between the Wi-Fi bands, in-band performance is very good.

AntSyn was also used to optimize a three-port antenna using a matching network to improve performance with the tighter spacing. The maximum VSWR was about 1.8:1, while the maximum coupling was ‐14.7 dB, which occurs between the two ports closest together (the right and center ports in Figure 4). The spacing is only 0.163 λ at 2.4 GHz between these ports, with a minimum spacing of 0.048 λ between the elements. The distance from the center to the left port is also 0.31 λ. Even more than in the two-port antenna example, the shapes of these antennas are very diverse. Essentially, AntSyn created a different antenna for each port, placing a parasitic fence between the center and left ports. This complexity was created automatically by AntSyn, demonstrating the inherent strength and robustness of the genetic algorithm, enabling the design space to be fully explored to produce MIMO antennas with optimal performance.