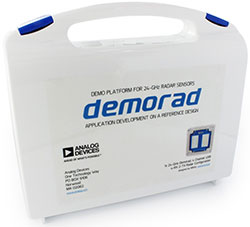 Silicon-based 24 GHz radar technology is enabling a new generation of real world, non-contact smart sensors that are increasingly being used in industrial and consumer mass market applications, such as automotive and drones. These radar sensors provide real-time information about an object’s presence, movement, angular position, velocity and range, from a few centimeters to several hundred meters away from the sensor. Until recently, radar sensors at mmWave frequencies required discrete components and were large, complex and expensive, which limited broad industrial market adoption. Now, 24 GHz radar products from Analog Devices (ADI) provide the performance and integration to achieve small size, low cost and ease-of-use for applications such as object detection, tracking, security control and collision avoidance warning systems. 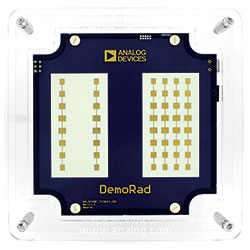 As shown in Figure 2, the platform includes the antennas and a full RF-to-baseband signal chain, including ADI’s 24 GHz chipset and Blackfin digital signal processor (DSP). The front-end contains two transmit (Tx) and four receive (Rx) channels, with the antennas located on one side of a printed circuit board (PCB) and the 24 GHz RF chipset, analog-to-digital converters and DSPs on the reverse side.

Signal processing options include raw data sampling and digital post processing, with real-time fast Fourier transform (FFT) and control firmware available in the Blackfin libraries. The system handles data rates up to 1.2 MSPS per IF channel. Via a USB 2.0 interface, Demorad connects to a PC that hosts software with an easy-to-use graphical user interface (GUI). The GUI enables control of the 24 GHz front-end and accesses a library of radar algorithms. Alternatively, Demorad can write the raw sensor data for post processing using custom routines developed in MATLAB, such as 2D/3D radar FFTs, constant false alarm rate (CFAR) and classification algorithms.

Demorad detects range and velocity of objects up to 200 m away with a resolution of approximately 75 cm. The field of view (FOV) is approximately 120 degrees in azimuth and 15 degrees in elevation, based on the antenna array design.

The radar system signal chain includes some basic algorithms in the DSP: FFT, beamforming and CFAR. The FFT provides range and velocity data, beamforming estimates the angular position and CFAR detects the target in the presence of clutter or other noise. Basic target detection and target classifications are run on the host PC. Demorad is primarily designed for collecting radar signals in the time and frequency domains and does not include advanced target detection or object classification algorithms. This application development is generally performed by the end-system developer, having knowledge of the environment that the radar sensor will be working in and the type of object detection required.

FMCW Radar: In FMCW mode, the distance to stationary targets is measured, with the frequency of the down-converted Rx signal for a target proportional to the distance to the target. The built-in FFT determines the frequency. Using the Range-Time display option, moving targets can be viewed and the display stores several FMCW sweeps. 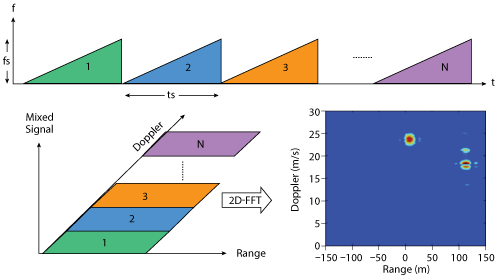 Range-Doppler: In Range-Doppler mode, the range to the targets and speed are determined. Range-Doppler mode is one of the most powerful modes because it can process multiple Tx ramps or chirps simultaneously by evaluating a two-dimensional Fourier transform, with the processed data displayed in the Range-Doppler map (see Figure 4). Range-Doppler is so powerful because it separates targets with different velocities, even if they are located at the same range. This is useful for identifying multiple fast-moving targets going in different directions. An example is resolving complicated traffic scenarios, where cars are moving in opposite directions or during overtaking maneuvers.

Digital Beam Forming (DBF): In DBF mode, the distance and the angle to the target are displayed. The signals from the four Rx channels are used to estimate the angle of the target, and the display shows the spatial distribution of targets in the xy-plane. In this mode, the system is configured the same as in FMCW but processes the IF down-converted signals differently. After calculating range, the angle of the target is determined by evaluating the phase differences between the four Rx channels. In DBF mode, a front-end system calibration is required to eliminate unwanted deterministic phase variations between Rx channels. Each Demorad system comes with factory calibration data that is loaded when the GUI runs, and the sampled IF signals are corrected before evaluating the sensors’ measured data.