The growing demand for wireless data in our society has facilitated new and evolving technologies to provide coverage around the globe. Millions of antennas have been and will be installed in every environment, from atop mountains to city streets and building roofs. They are even in orbit.

Maintaining and building on this network, especially as we transition to 5G, will require antenna and coverage testing in places with limited or restricted access for mobile carriers, installers, field engineers and field technicians. It also poses a new challenge for security and defense agencies tasked with monitoring communications traffic for nefarious transmissions. To locate, track and identify signals within this sea of communications, agencies will have to expand their tools and capabilities.

Traditional signal hunting has required a large amount of labor-intensive searching at the ground level. Typically, handheld spectrum analyzers with a horn antenna or a mobile interference hunting solution that combines a handheld spectrum analyzer, antenna and specialized software loaded on a tablet are used. To deliver on the promise of higher data rates and constant coverage, network testing must evolve and go places it has never gone before.

Advances in test technology have led to the development of ultraportable spectrum analyzers that are small and light enough to be connected to a standard drone. This configuration can make measurements in hard-to-reach places and/or do basic coverage mapping, all using off-the-shelf equipment. The same configuration is also useful in military spectrum monitoring and security/defense applications. It must be noted that country-specific government regulations concerning commercial drone usage must be followed during such tests.

Performance is another factor. The advancing technology has allowed for smaller packages in test solutions without sacrificing the ability to conduct highly accurate tests, which is necessary to locate interference in today’s crowded RF spectrum. Ultraportable analyzers with frequency coverage of up to 110 GHz and that have high dynamic range of greater than 100 dB at 110 GHz are necessary to simultaneously measure strong and weak signals on today’s networks. 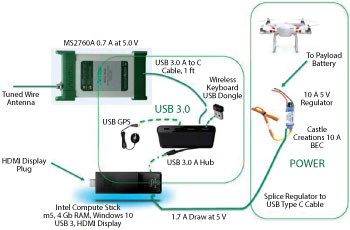 A drone test configuration was put to practice in a recent test to prove out the concept. A commonly available 500-size photo drone, DJI Phantom 2 Vision, without a camera was selected. For the purpose of the demonstration, the lack of a camera saved cost, reduced potential failures and allowed for a larger payload to be assembled.

The off-the-shelf drone had a number of automatic features typical of its class that proved advantageous for testing applications. These included:

The drone manufacturer does not list a payload specification, but many users have done tests and posted results online, which provided a guideline. The general consensus is that maximum payload is approximately 28 oz (785 g) to achieve up to 14 minutes of flight time. The total weight of the payload used was less than 20 oz. 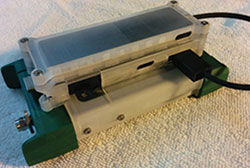 In addition to the ultraportable spectrum analyzer (Anritsu Spectrum Master™ MS2760-0070), the configuration assembled had other components to fit the requirements of the application. A 10 A battery eliminator circuit (BEC) set to 5.1 V was used as a regulator. Since 5.0 V is the correct voltage for the compute stick used, the regulator was adjusted via a USB programming kit. The compute stick drew about 1 A at 5.0 V, while the ultraportable spectrum analyzer required approximately 0.7 A at 5.0 V. A custom power supply cable was used to transfer the voltage from the BEC to the compute stick. One end of the USB Type-C, cable was cut to expose a red +5 volt wire (Vbus) and a black ground wire (GND). It is advisable to confirm the wiring using a voltmeter and USB Type-C pinout specification before connecting the compute stick. If it is incorrectly connected, irreparably damage to the compute stick could occur.

The lightweight compute stick (weighing 2.1 oz/59 g) came fully configured, with the exception of the operating system. While the compute stick processor and RAM were not exceedingly high, the stick still provided enough performance to make a quality measurement. 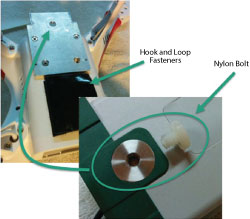 A PC with a minimum of Intel i7 processor and 16 GB of RAM was used with the ultraportable spectrum analyzer. This level of computer performance was necessary to maximize instrument performance. The PC had a Windows 10 Professional operating system. One drawback to Windows 10 is that it is not designed to handle sudden power removal, which can happen in this application due to unplugged cables or a dead battery. To help mitigate the problem, a separate payload battery is recommended and was used.

A tuned wired flight antenna (with close attention paid to weight) was constructed from semi-rigid coax. The cable was cut to be approximately 3 in long (7.6 cm) and the sheathing was stripped back until the newly constricted antenna resonated at 24 GHz. To tune the antenna, a cable and antenna analyzer was used. 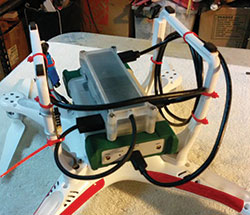 The payload consisted of the ultraportable spectrum analyzer, compute stick, USB hub and GPS (see Figure 1). The first three items were grouped via the 3D printed assembly shown in Figure 2. When mounting the payload to the drone, crash-proofing was a consideration. While it is not possible to completely guard against the most serious impacts, providing a shock-absorbing payload mount was beneficial.

In this test, a custom aluminum plate was developed and mounted on the drone using the bolt holes typically used for a camera (see Figure 3). The plate had a ¼-inch hole drilled for the nylon bolt used for the ultraportable spectrum analyzer. In addition to attaching the payload to the drone, the nylon bolt acted as a mechanical fuse, or break point, for the payload in case of an unplanned rough landing. A hook and loop fastener stabilized the payload and had some give in the event of a crash.

Once the payload was assembled and fastened to the drone, all the cables were connected (see Figure 4). Securing the cables tightly is essential to prevent them from becoming loose or unplugged during flight or a hard landing. In the worst case scenario, improperly connected cables could become caught in the propellers and bring the drone down suddenly. This could have resulted in injury or property damage, as well as the loss of the drone and/or the ultraportable spectrum analyzer. 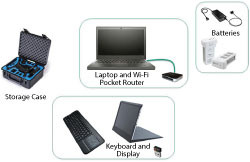 The ground package designed consisted of a control station, display and keyboard, extra batteries and chargers and a transit case (see Figure 5). It is advisable to use a keyboard with an integrated touchpad to eliminate the need for a mouse and necessary added connection. The monitor can be any HDMI compatible display. Battery-power equipment was used to replicate a scenario in which testing needed to be done in a location where outlets were not in the vicinity. 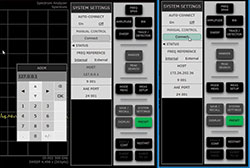 It also allowed for remote monitoring and control of the ultraportable spectrum analyzer. The remote display is shown in Figure 6. To do so, the analyzer software was installed on the laptop and compute stick. With the software open on the laptop, auto-connect was turned off, then the IP address of the compute stick was entered. Using the pocket router, the ultraportable spectrum analyzer could be monitored and controlled from distances as far as 100 meters. Other routers may allow for wider range.

While the compute stick held up fairly well to the inadvertent sudden power downs it experienced, there was no guarantee that it would have recovered. As a precaution, we installed a separate payload battery—allowable because of the light weight of the ultraportable spectrum analyzer. A two cell 1300 mAh LiPo battery would last about 40 minutes if it was drawn down to 80 percent of its capacity. These batteries are available online and weigh approximately 3.5 oz (100 g). A dedicated LiPo charger is required for these batteries. 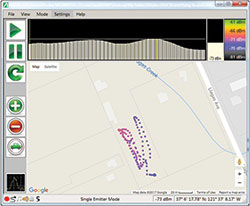 It is recommended that two or three extra batteries and chargers be included in the ground kit. Battery charging time is typically 30 to 45 minutes for each, so a set of three or four flight batteries will allow for hours of flight operations. If the drone is flown in an area without AC (mains) power, a method to charge batteries from a vehicle must be considered. Another option is to have enough batteries to complete the project.

Figure 7 shows the results of the drone test configuration proof of concept. The flight results display mapped RF power at 24 GHz. RF channel power measurements were plotted in a mapping tool, showing power versus time (along the top of the display), a power scale (in the upper right) and the GPS referenced measured data. The drone flight originated in the lower right corner of the map, with the dark purple bread crumbs indicating lower power. The drone flight pattern scanned the available area and identified that the strongest signal was in the upper left of the mapped area. When that area was investigated by personnel on foot using a handheld spectrum analyzer, the signal source was quickly found.

It is possible and practical to fly and operate an ultraportable spectrum analyzer connected to one of the many off-the-shelf drones on the market today. With the current move toward 5G and the high frequency range anticipated for backhaul, the ability to position a 110 GHz spectrum analyzer in the air will have many uses, some known and many not anticipated. This is also useful for military, defense and security applications as well as spectrum monitoring or hunting. The experiment conducted proves this approach as an effective solution to address a growing network verification challenge.