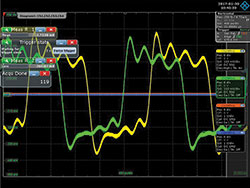 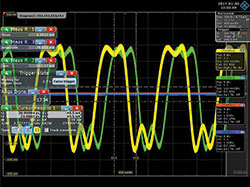 As the name suggests, a phase-locked loop (PLL) uses a phase detector to compare a feedback signal with a reference signal, locking the phases of both signals together. While this property has many applications, PLLs today are most commonly used in frequency synthesis, generally as local oscillators (LO) in frequency up- and down-converters or clocks for high speed analog-to-digital converters (ADC) and digital-to-analog converters (DAC). 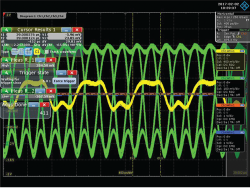 Until recently, little attention was paid to the behavior of phase in these circuits, but with a growing demand for efficiency, bandwidth and performance, RF engineers must devise new techniques to improve spectral and power efficiency. Repeatability, predictability and adjustability of the phase of a signal all play an increasingly important role in modern communication and instrumentation applications.

It is meaningless to refer to a phase measurement unless it is relative to another signal or to the original phase. For example, a vector network analyzer (VNA) phase measurement of a two-port network, such as an amplifier, relates the output phase to the input phase (∠S21) or the phase of the reflected signal to the incident signal (∠S11). For a PLL synthesizer, a phase measurement relates to the input reference phase or compares the phase of one signal to another. The “holy grail” or ideal state for any phase measurement is to be at a precisely desired value compared to the original phase. However, non-idealities such as nonlinearities, temperature differences and manufacturing variances mean that phase is among the more variable of properties in signal generation. In this article, the term “in phase” refers to signals that have precisely the same amplitude and timing properties, and “deterministic phase” means that the phase offset between them is known and predictable. 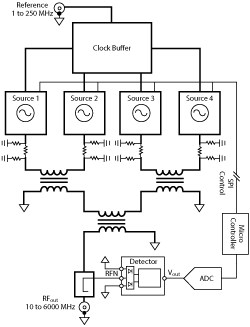 A high speed oscilloscope is a relatively intuitive way to compare output phase to a reference phase. To be visible, the input and output phases generally must be integer multiples of each other, a relatively common case in many clocking circuits. For integer-N PLLs, the relationship between the input frequency REFIN and the output frequency RFOUT is generally deterministic and repeatable. Scope probes are placed on both the REFIN and RFOUT ports, taking care to only capture the signal when the phase has settled. A sophisticated oscilloscope, such as the Rohde & Schwarz RTO1044, allows the event trigger to activate only when a specific digital pattern has been written to the PLL device and a rising edge from the known signal is present. Since there may be a delay between writing the digital pattern and when the final signal settles, some delay must be inserted between the two events, which is a capability provided in the RTO1044.

The goal of this measurement is to verify that the phase delay of a PLL synthesizer—an Analog Devices ADF4356 for example—relative to a known reference signal—another ADF4356 programmed to the same output frequency—is constant and repeatable when powered on. To measure this, two low speed probes are connected to the CLK and DATA lines of the ADF4356 SPI interface. Once the digital pattern to write the particular frequency is noted, a wait time of 1 s  is programmed before the instrument captures the time domain plot showing the output of both PLLs. The two ADF4356 PLLs are locked to a VCO frequency of 4 GHz and divided by eight to generate 500 MHz. One of them is repeatedly powered off and on using the software power-down feature. With the oscilloscope in infinite persistence mode, 119 acquisitions are captured, and the phase difference between the two is shown to be constant and repeatable (see Figure 1).

Several precautions are followed to ensure repeatability. Low R divider values introduce less uncertainty than higher ones, and it is vital that the divided feedback from the VCO output is fed to the N counter input. Given that the ADF4356 PLL and VCO contain 1,024 differing VCO bands, it is important that this uncertainty is eliminated by using the manual calibration override procedure.1

Phase resync is defined as the ability of a fractional-N PLL to return to the same phase offset at each given frequency: observing frequency F1 with phase P1, when changing channels to frequency F2, the same original phase P1 is observed when the frequency is reprogrammed back to F1. This definition ignores changes due to VCO drift, leakage current and temperature, for example. Resync sends a reset pulse to the fractional-N sigma-delta modulator that places it in a known repeatable state. This pulse must be applied after frequency settling mechanisms are complete, such as VCO band select and loop filter settling time. With the ADF4356 PLL, its value is controlled by a timeout counter in register 12. The ability to adjust the timing of this reset pulse enables a degree of output signal adjustability, with the ability to vary the timing in steps of 360 degrees/225, which is finer than can easily be measured by most instruments. 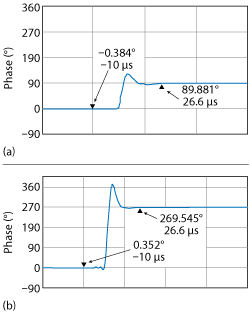 To illustrate this measurement, both ADF4356 PLL VCO’s are programmed to 4002.5 MHz and divided by eight. One PLL is programmed to a VCO frequency of 4694 MHz and then programmed back to 4002.5 MHz. Using an oscilloscope, as previously described, to examine the behavior of the PLL, with 1,734 frequency changes, the PLL repeatedly settles to the same phase (see Figure 2).

To characterize the variable phase offset feature of the ADF4356, the phase word is programmed to 4,194,304/225, which equals 90 degrees. Similar values for 90, 180, 270 and 0 degrees are programmed (see Figure 3). Relative to the original signal on channel 1, four equally spaced signals are observed, confirming the accuracy of the phase resync with programmable offset. This feature is highly useful. A lookup table of phase values can be created for each user frequency, with the phase value dialed in on each use. In an application which combines four LO frequencies in phase (see Figure 4), the phase resync and offset features are used to adjust output phases so that they combine to give 6 dB lower phase noise. If used as a tunable LO (likely on the first stage of a signal analyzer), the resync and phase offset features allow the user to run a one-time calibration when powering up to determine the precise phase value for each LO frequency.

Vector signal and network analyzers are useful for characterizing phase behavior, although their use is limited to comparing the phase of the device to its initial value. Sophisticated analyzers like the Rohde & Schwarz FSWP can be placed in FM demodulation mode, and the phase output selected. This is useful for evaluating PLL phase resynchronization. Figure 5 shows an example of the ADF4356 switching phase by 180 degrees at an output frequency of 5025 MHz. 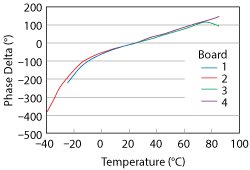 The phase adjust feature avoids resetting the sigma-delta modulator and simply adds a phase word between 0 and 360 degrees to the existing phase. This is useful for applications in which a reset of the phase is not desired. It can be used to dynamically adjust the phase word to compensate for known differences in phase due to effects such as temperature. Phase adjust “adds” phase to the existing signal on each update of R0 (with the value programmed to register 3 of the ADF4356). It does not contain a reset pulse like phase resync. Measurements from a Rohde & Schwarz FSWP show the addition of 90 degrees (see Figure 6a) and 270 degrees (see Figure 6b) to the original signal. In both cases, the output frequency of the ADF4356 is set to 5025 MHz before changing the phase.

Because the physical parameters of inductors change over temperature, so do the electrical characteristics, which manifests as a change in phase. To mitigate this, a user can program a phase offset. For example, two ADF4356 PLLs programmed to a 4 GHz output frequency and placed in the same oven chamber and at the same initial phase track closely in phase over temperature (see Figure 7). This shows the phase can be adjusted depending on temperature.

Figure 8 E-plane pattern of two, λ/2 dipole antenna elements spaced λ/4 apart and fed in phase (a) and 90 degrees out of phase (b).

Beamforming is a technique that will be key to the architecture of 5G networks, i.e., using multiple antenna array elements with varying phase and amplitude at each element to steer the antenna energy to the end user. Figure 8a shows the E-plane array pattern of two half wavelength elements spaced λ/4 apart and driven in phase. The antenna radiation pattern is omnidirectional in the H-plane. Figure 8b shows the E-plane pattern of the two elements driven by signals 90 degrees out of phase; the resulting radiation pattern becomes more directional. As the number of elements increases and are properly phased, the beam becomes more focused or directional, enabling more of the transmitted energy to be directed toward a particular user. Beamforming results in greater spectral efficiency. However, for beamforming to be repeatable, the LO phase must be repeatable, and that repeatability is enabled by the PLL and synthesizer. PLLs with the features described in this article will eliminate the need for additional calibration of the beamforming circuitry.

The phase adjust and phase resync features incorporated into modern PLL synthesizers ensure that uncertainties in the phase characteristic of the LO are eliminated. The ability to adjust phase using these features provides the user with additional levers to overcome other phase delays in the circuit that are difficult to adjust by the beamformer or the baseband circuitry.