Equipment failure costs money and nowhere is this truer than in the world of satellite communications. Satellites themselves, of course, become just about the most expensive junk of all time when they fail, but ground stations of every kind can also inflict unwanted bills on owners, users and customers alike when performance of any constituent part falls below par or stops altogether.

Testing of satcom equipment and assurance of reliability is therefore a serious issue. It starts at the component level, runs through equipment manufacture and continues into system operation. Redundancy can, in some cases, cater for the catastrophic failure, but this is expensive in itself. Taking steps to avoid breakdowns and to maintain full performance is a better option. With this in mind, AtlanTecRF has introduced the LNI noise injection loop test translator (LTT) system, said to be the first combined system of loop test and noise injection.

In the RF/microwave environment, there is a wealth of general purpose and immensely versatile laboratory and field test equipment available, but it comes with a pretty hefty price tag if your test regime is narrow and very focused. The RF focus in satellite communications ground stations concerns the performance of the transmitter and of the receiver. A non-performing receiver can certainly ruin the user’s day, but a bad transmitter has the ability to extend the upset to many other satellite users, as well as the satellite owner.

A long-standing item of specialized test equipment in this industry has been the LTT. It has the ability to facilitate off-satellite RF testing of ground systems (including vehicle, aircraft and shipborne) by looping back a portion of the transmit carrier to the receiver. Both arms of the system are then set up for optimum performance, such that when the switch to “live” is made, everything functions as it should. Partial tests are also possible with different loop back conversions, and these include transmit (Tx) to L-Band for transmitter alone testing and L-Band to receive (Rx) for checking out just the receiver.

Another parameter that is essential in the satisfactory operation of the satcom system is receiver sensitivity. How well does the receiver distinguish the wanted signal from the all-too-abundant noise? One approach in common use in all types of RF receivers is to inject white RF noise into the receive chain somewhere downstream of the antenna and, by varying its intensity, determine the point at which the signal is no longer detectable. One of those downstream points is often at the entry to the modem at L-Band.

Certainly it is important for the manufacturers of satellite communications systems to carry out both loop back frequency tests and receiver sensitivity tests. Loop back frequency because how else can one test a transmitter/receiver combination in a factory without a satellite? Sensitivity because this is key in supporting the claims made for the product to potential customers and users.

Of course, testing takes time and money and therefore designing test equipment to minimize this expense along with down time should be high on the priority list for the test equipment manufacturer.

These issues are all addressed by AtlanTecRF’s LNI series of Ku-Band, Ka-Band and Q-Band noise injection LTT systems. The series is designed to provide the satellite communications engineer with a complete and versatile setup for off-satellite loop back testing of the transmit (Tx) signal to L-Band, combined with the ability to inject white symmetrical Gaussian noise for simultaneous receiver and modem testing.

Figure 1 shows the test setup using the LNI unit. The unit accepts an input at the Ku- (12.75 to 14.50 GHz), Ka- (27.5 to 31.5 GHz) or Q-Band (43.5 to 45.5 GHz) uplink frequency from a suitable point in the uplink chain—the block up-converter output or as a coupled signal from the high power amplifier output, for example. The test translator converts this to an L-Band signal suitable for the modem input. Noise is coupled into the signal path at L-Band; both the signal and noise levels can be independently adjusted. This enables the modem’s performance under varying signal-to-noise ratios to be assessed, simulating the effects of varying system noise on link performance. 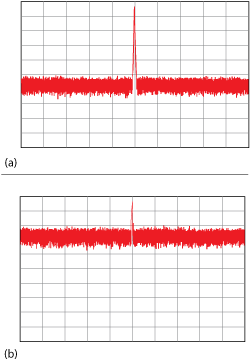 The loop test function is controllable in terms of input attenuation over a 60 dB range in 0.5 dB steps and local oscillator (LO) frequency in 25 MHz steps, while the white noise level, at the common L-Band of 800 to 2600 MHz, is variable by up to 60 dB in 0.25 dB steps with an additional mute facility. A full list of input, output and LO frequency ranges for the complete range of noise injection LTT systems is given in Table 1.

The LTT has a typical 0 dB conversion loss at zero input attenuation, while the base noise level generated is nominally -84 dBm/Hz and is injected via a variable attenuator and 20 dB directional coupler into the LTT’s L-Band output. The noise level can be muted completely for LTT-only operation and is also switchable to an external output for noise-only operation. Figure 2 shows two spectrum plots with the same signal level and varying noise power. Filtering is included to prevent noise appearing at the Tx input port or mixing with the synthesized LO output.

Control of both LTT and noise injection is affected by either front panel controls or remotely via Ethernet with an easy-to-use graphical interface. Frequency stability of the LO is derived from either the internal oven controlled crystal oscillator (OCXO) or from a system 10 MHz reference.

In addition to the 2U × 19 in configuration, the LNI noise injection LTT systems are available in portable bench mount instruments for transportation to multiple test sites and laboratory locations.

The new system has the capability to cut testing time by combining the normal loop back signal test with noise injection at modem level, all in one compact 2U rack unit. It can greatly enhance the capability for satellite communications engineers for factory system testing or at a satcom ground terminal.