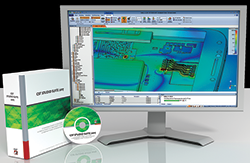 EM simulation reduces costs and design time, enabling users to analyze and improve the performance and compliance of components and systems from the earliest stages of design. CST STUDIO SUITE® 2017, the upcoming* release of the EM and multiphysics simulation package, introduces new features that extend the software’s range of applications. These features include both front-end and back-end improvements across the suite, with many focusing on tools for synthesizing and simulating components, as well as for managing and analyzing these components as systems.

Cross-coupled filters offer a compact and high-performance way to use the spectrum efficiently. However, the complex and sensitive nature of these filters makes them challenging to design with traditional methods. Filter Designer 3D can automatically synthesize cross-coupled and diplexer filter designs to meet the specifications, including transmission zeroes, Q-factor and equiripple.  Filter Designer 3D can calculate the coupling matrix on which the filter engineer can base a design, or produce a full filter model that can be used as the basis of an optimization or system simulation using the full-wave 3D solvers of CST STUDIO SUITE. An example is shown in Figure 1.

System integrators and electromagnetic compatibility (EMC) engineers often need to know how antennas on a shared platform couple to each other. On smaller platforms, the CST® Time Domain Solver and Integral Equation Solver are efficient options for antenna coupling simulation. CST STUDIO SUITE 2017 expands this capability to extremely large platforms as well. The ray-tracing Asymptotic Solver (A Solver) in CST STUDIO SUITE can now directly calculate the coupling between antennas. The A Solver can simulate extremely large platforms such as aircraft, ships and buildings very efficiently, making it well suited to many kinds of antenna placement scenarios.

Electromagnetic interference between subsystems, such as antennas on a platform or channels on a PCB, is a vital consideration in many applications. The new Interference Task, illustrated in Figure 2, offers a straightforward approach for investigating potential EMI issues using coupling data from simulations—including results from the new A Solver approach. With the Interference Task, EMI problems can be identified and mitigation approaches tested on a virtual prototype. 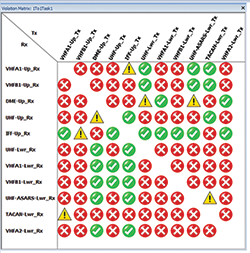 Figure 2 The Interference Task shows which combinations of RF systems can lead to co-site interference.

Thermal effects are critical in high-power or high-speed applications—overheating can cause thermal expansion, detuning and potentially damage the device. Simulating these effects accurately needs multiphysics simulation, with EM and thermal solvers linked together. CST STUDIO SUITE 2017 sees the company expand its multiphysics tools with the Conjugate Heat Transfer (CHT) Solver. This uses computational fluid dynamics (CFD) to simulate the flow of air through devices, taking fans and vents into account. With the CHT Solver, users can include the cooling systems in their multiphysics simulation, allowing these systems to be designed and optimized before constructing prototypes.

Many companies have built up a collection of simulation models and components that can be combined and modified to create new products. The Component Library in CST STUDIO SUITE 2017 offers a straightforward way to store, manage and find these models.

Component models can be loaded into the library and archived with tags and version control. These can then be searched and downloaded to be integrated into new simulation projects, speeding up the early stages of design. Users can create both public and private libraries and models can be encrypted, allowing users to ensure that sensitive designs remain confidential.

As speeds increase, the design of integrated circuits (IC) is increasingly becoming a task that requires full-wave 3D simulation. This is especially true of RFIC components such as inductors. The CST STUDIO SUITE 2017 chip interface allows IC designs to be imported in Open Access Database and GDSII format, and simulates the fabrication process of ICs, layer by layer, to produce a realistic 3D model of the IC suitable for simulation.

The Array Wizard is a well-established part of CST STUDIO SUITE, and automatically guides users through the array design workflow, from simulation of the individual element to automatic construction of the entire array. The 2017 version will add support for non-periodic and arbitrary 3D arrays, broadening the use cases for the tool significantly.