The Smith chart was introduced by Philip Hagar Smith in 1939 and then refined and extended several years before becoming an icon of microwave engineering. To have a finite and practical size, the classical 2D Smith Chart is constrained to the unit circle. Hence, loads with reflection coefficient magnitude greater than one cannot be plotted. In 2011, the 3D Smith chart was published by A.A. Muller, P. Soto, D. Dascalu, D. Neculoiu and V. E. Boria. The 3D Smith chart unifies the design of active and passive circuits with any magnitude of the voltage reflection coefficient on the sphere by keeping all the circle forms of the classical Smith chart unchanged, but its handling requires a spherical surface and thus a CAD tool (www.3dsmithchart.com) was developed in order to utilize it. 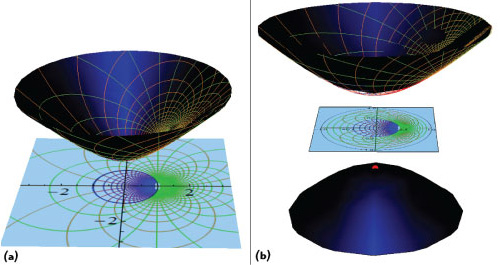 Figure 1 Preliminary construction: Generalized Smith chart mapped on the upper part of the two sheet hyperboloid (the upper sheet extends to infinity) (a) and stereographical mapping of the hyperboloid Smith chart in the unit disc from the red point (b).

Figure 2 Input impedance (in black) of a microwave oscillator based on an Infineon bipolar transistor on the traditional Smith chart, the input impedance at the oscillation frequency is thrown towards infinity.

The creators of the 3D Smith chart have now extended the tool by using a hyperbolic Smith chart suitable for representing both circuits with negative and positive resistance with the magnitude of the voltage reflection coefficient ρof any possible value (0<ρ<∞) in a compact manner in the unit disc. This is done by the means of single equation given by the Poincare disc model of hyperbolic geometry. Circuits exhibiting negative resistance have the magnitude of the voltage reflection coefficient bigger than unity and thus are mapped into the exterior of the classical Smith chart. In order to overcome the visual problems generated by this issue, two solutions were previously successfully proposed: the 3D Smith chart which implies the usage of sphere and the negative Smith chart, however both having their inconveniences; the 3D Smith chart, because it cannot be completely exploited without the means of a software tool while the negative Smith chart because it cannot be used at the same time as the regular Smith chart the scales used for one are meaningless for the other.

A sequence of vertical pulling/stereographical projection, as shown in Figure 1, is applied (inspired by Beltrami-Klein model of non Euclidean geometry while using Poincare hyperboloid model).

To obtain an oscillator at a specified frequency, the microwave active circuit must be designed to provide an infinite reflection coefficient at such a frequency. This requires moving to infinity in the reflection plane, thus a planar Smith chart not very useful (see Figure 2). In the hyperbolic reflection plane, infinity is represented by the unit circle (the way in which this approached proving an inductive or capacitive behavior). One may think in the hyperbolic reflections plane that as a reflection coefficient one moves towards the unit circle, its energy becomes lower and thus its movements become slower thus reaching it becomes impossible since it means infinity. The hyperbolic Smith chart allows solving this type of problem in the plane graphically using a unique visual representation (as shown in Figure 3), since the infinite mismatch point is placed in a bounded and finite position on the unit circle. 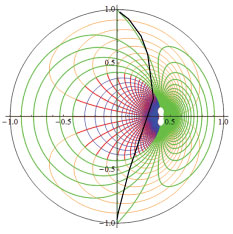 Figure 3 Input impedance (in black) of a microwave oscillator based on an Infineon bipolar transistor is tending towards infinity (unit circle) |ρ|= ∞ ↔ |ρh| = 1 on the hyperbolic Smith chart.