Finmeccanica and the Politecnico of Milan set up Innovation Hub 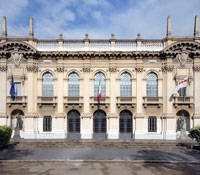 Research, development, innovation and training are the focus of the Innovation Hub project framework agreement that Finmeccanica and the Politecnico of Milan have signed, which defines a number of shared projects that will benefit from the synergy between the Milanese University and the Group. The agreement was signed in Milan, Italy by Finmeccanica's Chief Executive Officer and General Manager, Mauro Moretti and Prof. Giovanni Azzone, Rector of the Politecnico of Milan.

With this agreement, the new Finmeccanica – as ‘One Company’– is taking a new approach to innovation. The company has always been open to collaborations with universities, research foundations, SMEs and start-ups, but with this initiative it intends to raise the bar on Open Innovation. It recognises the fact that in addition to developing original ideas generated within the company, a large enterprise must also embrace areas of innovation beyond its own boundaries.

Particular focus will be on joint participation in regional, national and international funding and research programmes. In the European arena, development efforts will focus on initiatives linked to research programmes such as Horizon 2020, the most important funding programme for research and innovation launched by the European Union, and Clean Sky 2, which focuses on reducing the environmental impact of commercial aviation, aiming at the sustainable development of air transport.

Furthermore, strategic partnerships with prominent Italian and international companies to research issues of common interest play a crucial role at the Politecnico of Milan. The University's aim is to steer its basic research towards industrially significant applications, as well as to jointly monitor technological evolution.

Moretti pointed out, “Companies' focus on innovation is ever more linked to identifying advanced sources of knowledge that may only be met by the university research system, able to sustain companies in maintaining a competitive position in national and international markets. A large enterprise such as Finmeccanica needs to selectively ‘open’ up to innovation/invention processes and, as is the case with the Innovation Hub, with world-class centres.

“For Finmeccanica, the aim is to identify a selected number of university hubs, whose excellence is internationally recognised, to launch more focused and better structured collaborations, aiming not just at research and technology transfer, from and to companies, but also at top quality education. The Agreement with the Politecnico of Milan moves in this direction, with the aim of strengthening the fruitful synergies between industry and research to benefit the whole country as a system.”

“The agreement with Finmeccanica is part of a strategy which the Politecnico of Milan seeks to work side by side with the country's industrial concerns in medium range partnerships to create a research environment that is ever more permeable between scientific academic methodologies and industrial needs and technologies,” said Azzone.

He added, “Within this strategy Finmeccanica – which represents an international landmark in a number of engineering sectors – and its wish to invest in research with the Politecnico of Milan, offer an opportunity for innovation, for researchers in both institutions and above all for our country's attractiveness. A steering committee will be set up to provide strategic guidance and monitoring so that intentions turn into actual projects."

In addition to technical and scientific research, the scope of the cooperation between Finmeccanica and the Milanese University will also include design activities and the organisation and provision of training courses. Furthermore, cooperation between the two entities will be strengthened through support to activities the Politecnico of Milan is involved in such as degree theses, PhD programmes and internships at the Group's branches.

Within Innovation Hub, common topics will be defined by a steering committee, consisting of six members, three from each party, which is responsible for identifying and prioritising the technological sectors the collaboration should focus on.