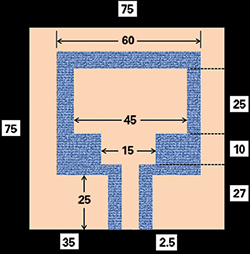 A broadband T-shaped patch textile antenna with a coplanar waveguide (CPW) feed has a 10 dB return loss bandwidth from 1.8 to 3.8 GHz and good radiation patterns across the entire band with a maximum gain of 1.94 dBi. Return loss and radiation pattern differences are small when placed on a human body vs. free space, making it a promising candidate for WLAN and WiMAX wearable applications.

With an increasing interest in smart clothing and wearable wireless communication systems, a wide range of devices may be integrated into human clothing which can be useful for various wireless applications such as fire fighting, GPS, healthcare and personal satellite communication.1,2 In these applications, the antenna plays a vital role in system performance. Textile antennas, as a new antenna concept, are becoming more and more attractive for smart clothing due to their light weight and easy integration into everyday wear.3

Some recently proposed wearable antennas4-6 are either complicated or only able to cover a very limited bandwidth. Due to its inherently narrow bandwidth, bending of a conventional patch antenna in wearable applications can cause its resonant frequency to shift reducing power transmission efficiency. A coplanar waveguide (CPW)-fed antenna, on the other hand, has wider impedance bandwidth and consists only of a single conducting layer that is more convenient for wearable textile antenna fabrication and applications. This article will introduce a cost effective, high performance wearable CPW-fed textile antenna with ordinary fabric as the substrate. The antenna has a 10 dB return loss bandwidth from 1.8 to 3.8 GHz covering both WLAN and WiMAX bands, and a higher tolerance to twisting conditions on human clothing. 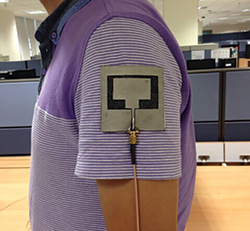 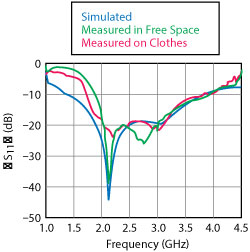 To minimize performance degradation from deformation and fabrication tolerances, a microstrip patch antenna with a CPW feed structure is chosen (see Figure 1). It consists of two layers. The top layer is a conductive fabric and the bottom layer is a denim substrate with a relative permittivity of 1.6, loss tangent of 0.02 and thickness of 1 mm. Ordinary denim fabric is chosen as the substrate because it is flexible, lightweight, easy to integrate into clothing, stackable for different thicknesses, and most importantly it is a popular clothing material. Both materials are flexible and conformable. They can also be easily cut without special tooling. The textile antenna prototype is handcrafted by cutting the conductive fabric to the prescribed antenna geometry and then adhering it to the denim.

where c is the speed of light in air, εr,e is the effective dielectric constant, L and W are the inner length and width of the slot, respectively. The initial size of the antenna can be approximated by  Equation 1. The gap between the feed line and the ground is chosen to create 50 Ω CPW, and the length and width of the T-shaped patch is used to tune the antenna’s resonant frequency and directivity. Parameters of the antenna geometry are optimized and a good return loss bandwidth is achieved using commercial field simulation software.8 Optimized dimensions to achieve an impedence match over a frequency range of 1.4 to 3.8 GHz are shown in Figure 1.

Measured radiation patterns in free space and on-body at three points across the frequency band are compared in Figure 4. There are some differences likely due to the fact that the body’s tissues influence substrate permittivity, changing the antenna currents. Nevertheless, there is little change in maximum gain with a value of around 1.9 dBi. The results show that performance of the textile antenna when placed on-body is comparable to that of free space.

The design and performance of a wearable broadband CPW-fed textile antenna are presented. The antenna’s simple structure, wide impedance bandwidth and denim fabric substrate distinguishes it from previous wearable antennas. Return loss is greater than 10 dB across a 2 GHz bandwidth from 2 GHz from 1.8 to 3.8 GHz. Radiation patterns are comparable to those measured in free space.

The authors would like to thank the Chinese Scholarship Council for its financial support.

Yilong Lu received his B.Eng degree from Harbin Institute of Technology, his M.Eng degree from Tsinghua University, and his Ph.D. from University College London. He joined Nanyang Technological University (NTU) in 1991, where he is currently a full professor in the school of electrical and electronic engineering. His research interests include radar, antennas, array based signal processing, computational electromagnetics and evolutionary computation for optimization of complex problems.

Jie Jin received her B.Eng degree, M.Eng degree and Ph.D. from Tianjin University. She joined Tianjin University in 2001, where she is currently a full professor in the school of electronic information engineering. Her research interests include antennas, laser techniques, optical components and optical communications.