The Internet of Things (IoT) is the recognized next step of ubiquitous networking of machines and devices. Smart appliances currently evolve in conjunction with small, lightweight devices which generate completely new requirements for the underlying radio communication technology. Significantly, material costs of these devices are often well below $10, such that a wireless communication component has strong demands on the target pricing. The classical ISM bands are suitable candidates for license-free radio communications, utilizing cheap radio transceivers compared to WLAN solutions or cellular radio technologies. However, transmission ranges of only a few meters have been a significant hurdle to network implementation in the past.

To address this issue, a new transceiver front-end technology called LoRaTM (an abbreviation for long range) has been developed and patented by the semiconductor company Semtech. It allows for much longer distances compared to the classical ISM band radio front-ends, with up to 15 km range. The long range is achieved under line-of-sight conditions using a correlation mechanism based on spread spectrum technology in the front-end of the transceiver, with the trade-off of reduced transmission bit rates at the longer distances.

Cellular systems with a coverage area of many square kilometers are possible. According to the envisaged applications, tens to hundreds of end nodes will have to be handled within one communication cell. Thus, the central communication point – the concentrator, as the radio part of a LoRa gateway – must be capable of massive parallel receive operation on many channels, each of them individually configured for certain distances and bit rates. There are many applications which will be supported by long range cellular license-free communications such as  agriculture, industrial, logistics, smart environment, smart metering, smart city and smart home. Public telecom operators as well as private companies are currently implementing LoRa-based system solutions with the corresponding access networks and the necessary IT infrastructure. The deployment of LoRa technology is structured and organized by the LoRa Alliance (www.lora-alliance.org), where semiconductor companies, radio equipment manufacturers, firmware and software providers, mobile operators, IT companies and test houses work together to set up a complete LoRa ecosystem, including the required quality procedures and system certifications. 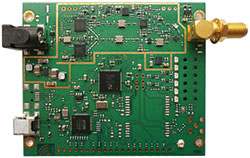 The novelty of the air interface is mainly characterized by the introduction of a spreading factor, which denotes the relationship of transmission time to bit rate due to the spread spectrum transmission mentioned earlier. It utilizes a bandwidth of 125, 250 or 500 kHz in the available ISM radio bands (e.g., about 868 MHz in Europe), together with frequency selection and frequency hopping options, to transmit with a transmitter-specific hopping code for user separation. A transmission channel is mainly characterized by the spreading factor and the frequency. The configuration parameter space is enhanced by two very important dimensions utilizing these two parameters.

Whereas the end nodes are capable of transmitting data packets on only one channel, the current IMST concentrator module – iC880A – is able to receive packets of different end nodes on eight channels in parallel. The IMST LoRa iC880A concentrator module (see Figure 1) is fully certified according to the European R&TTE guidelines, offering a comprehensive set of firmware options for media access and networking. Operating in the 868 MHz frequency band and measuring 79.8 × 67.3 mm, key features include: sensitivity down to -138 dBm, output power to 20 dBm, USB or SPI interface with optional GPS, SX1301 baseband processor, 2 × SX1257 Tx/Rx front-ends, 49 × LoRa demodulators, 1(G)FSK demodulator and 8+1+1 parallel demodulation paths for LoRa and GFSK demodulation. A complete LoRa explorer kit is available for networking trials, and LoRaWANTM and IMST LR_Base/LR_Starnet firmware is available for the optimal choice of MAC and networking features.

The concentrator architecture is fully scalable if more channels are required, with the expense of additional hardware. Several users may share a channel in the time domain if a duty cycle for each user is introduced. With this capability of parallel reception, the handling of large LoRa cells with hundreds of end nodes is feasible and maintainable.

While a mesh network structure always imposes a heavy protocol overhead, which does not fit with the notion of lightweight implementation, a star structure with a central communication point in the middle of a cell appears to be the right means of administering the deployed end nodes with central control, strong synchronization and minimum protocol overhead (see Figure 2).

Figure 2 Typical architecture of a LoRa network with different applications and different spreading factors (SF) and frequency channels (F). The concentrator is the central radio part of the gateway.

The protocol stack firmware has to cope with such new and promising architecture and use cases with their specific user scenarios. Communication capacity has to be optimized – this is particularly important with the lower bit rates compared to traditional short range wireless communication. Furthermore, the media access control (MAC) has to be organized in such a way that the number of collisions on the radio channel is minimized and the transmitted power and used spreading factor are set to the actual required minimum, depending on the data rate and the distance of the end nodes to the concentrator in the middle of the cell.

This is done with an adaptive data rate (ADR) access scheme. The first MAC implementations were quite simple with only random access to the channel; since then, more complex MAC designs have been realized. With a view to regulatory requirements, adaptive frequency agility (AFA) and listen before talk (LBT) are two strategies to avoid the duty cycle restrictions of the ISM bands. Other implementations with central control and central synchronization aim to maximize system capacity while minimizing power consumption of the sensors, simultaneously allowing for long term battery operation of the end nodes.

LoRa-based communication systems will complement the mobile networks in an ideal manner – no costs for air time will occur, the devices are inexpensive and can reach long ranges. Gateways built from the concentrator will enable a communication path to the Internet, either via mobile cellular technology, DSL subscriber line, Ethernet or wireless LAN connections.