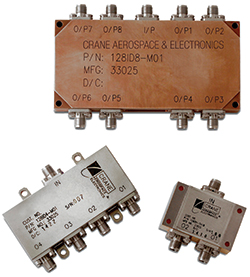 Have you ever been in a design discussion with a customer about the product they intend to purchase and you find that you may be able to solve their problem by creating a new product? That is exactly what happened with Crane Aerospace & Electronics, which led to the introduction of a new product family: Ku-Band Iso-Dividers. The Crane microwave team was meeting with a satellite customer who was planning to procure separate power dividers and isolators. They were seeking a convenient method to connect the power divider with the isolators, optimizing connector positioning to allow the power divider to be directly connected with the isolators and minimize or eliminate cables. Understanding the needs of the customer and the technology available across Crane’s organization, Crane engineers went a step further and offered an integrated solution – both parts in a single package, which gave birth to a new product family of Iso-Dividers (and Iso-Combiners). These products combine Wilkinson power dividers with ferrite isolators. The functional block diagram of a four-way Iso-Divider is shown in Figure 1.

Power dividers and combiners perform key functions in satellites, used for unit redundancy and antenna sharing. Wilkinson dividers provide low insertion loss and good isolation between the unit’s outputs. However, they require a good impedance match to each input and output. If a device attached to a divider port fails, the divider will likely see a mismatch, causing performance issues such as higher insertion loss, VSWR and poor isolation. Inserting ferrite isolators is one way to make the Wilkinson divider immune to a failure presented at one of its output ports.

The traditional method of providing this function in a system has been to purchase a stand-alone power divider and add separate isolators. Using the example of a four-way power divider; the bill of material (BOM) would be:

Assembling the components inside this functional block requires 10 SMA connections. Each component in the assembly must be mounted with a minimum of two screws per part, at least 12 screws total.

Procuring an integrated solution lowers cost by reducing the BOM to a single device and simplifying management to a single supplier, rather than several. Reliability is also improved with the integrated implementation. Separately connected components reduce the MTBF, given the additional potential for failure at each interconnection. The performance of the single unit is better, with lower insertion loss and VSWR degradation than if the components were connected with cables and connector interfaces. Insertion loss is 1.2 dB for an integrated four-way divider, versus 2.2 dB for the discrete implementation. For Crane to achieve this improved electrical performance, matching between the divider circuit and the isolator must be optimized. With control of all elements of the circuitry, adjustments can be made to the characteristics of both the power divider and isolators to ensure good matching between them. This tailoring improves loss, ripple and phase linearity across the operating band, which would not be possible with individually purchased components.

Combining all parts into a single package allows the integrated unit to be smaller than the individual components with separate cables – a 60 percent reduction in volume with Crane’s solution. Along with size, weight is reduced, since extra cables and connectors are no longer required. When satellites become smaller and the industry moving to deploy large constellations of micro-satellites, “space in space” is a premium. Satellite and payload manufacturers must fit more functionality into a smaller volume. By combining the functionality of four or more components into one, the Iso-Divider helps meet the demands for reducing footprint with increased functionality. The device itself is packaged in a welded enclosure to assure robustness and avoid the additional space and weight required by a screw cover. The housing is vented with a small hole to assure equalization with the vacuum of space, which relieves any stress due to the internal atmospheric pressure encountered during the ascent into space. The packaging also contains magnetic shielding that is required to complete the magnetic field for the isolators and capture the fields within the device to avoid interaction with other devices on the satellite. 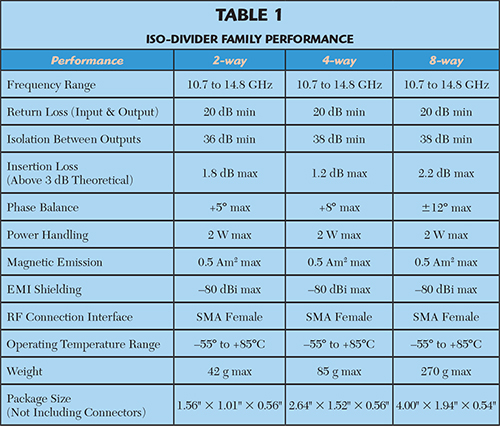 The Iso-Divider was initially introduced as a two-way device operating at Ku-Band. Four- and eight-way Ku-Band units have since been introduced. Performance specifications of the family are shown in Table 1. All of these products provide the same advanced features and compact packaging. Expansion of this product family is planned, as well as offering Iso-Combiners. The difference between a divider and combiner circuit is the sense or direction of the ferrite isolators, as Wilkinson dividers or combiners are fully reciprocal. In addition to the Ku-Band family, Ka-Band units with similar functionality are planned.