Microwave oscillators generally employ series and parallel feedback networks requiring frequency stabilization elements. There are several choices, such as dielectric resonators (DR),1-3 elliptic filters,4 ring resonators5 and hairpin resonators.6 The most important performance parameter is phase noise, since it determines a communication system’s overall performance.7 It is well known that low phase noise oscillators require high Q frequency stabilization elements. Although the DR has a high quality factor, it is not easily integrated with other circuit elements due to its bulky and non-planar profile; while microstrip resonators, though easily integrated, exhibit low Q values.

In recent years, substrate integrated waveguide structures have received much attention. SIW consists of two rows of metallic vias on a substrate and has similar propagation characteristics as that of rectangular waveguide; for example, an SIW cavity’s resonant frequency is determined by its geometric dimensions. Moreover, SIW has several benefits, such as a potentially high-Q factor, low insertion loss and PCB compatibility.

Figure 1a is a top view of a passive SIW reflective resonator and its equivalent circuit (W=L=13.9 mm, R=0.3 mm, P=1 mm, Wp=0.1 mm, Lp1=2 mm, Wm=1.6 mm). The passive SIW resonator is modeled as a series RLC circuit. In this case, Rloss represents the combined dielectric, conductor and radiation losses, and L, C are determined by the SIW’s physical dimensions to obtain the desired resonant frequency.

where W and L are the length and width of the SIW resonator, and c0 and εr are the speed of light in a vacuum and the relative dielectric constant of substrate, respectively. As shown in Figure 1a and the solid line of Figure 1d, the simulated TE101 mode resonant frequency for the passive resonator is 10.09 GHz when W=L=13.9 mm, the unloaded Q is

In order to increase the Q, the denominator Rloss must decrease. From Figure 1d and the method of Drozd and Joines,10 the simulated loaded Q (ZL=50 ohms) of a passive SIW resonator is about 500.

Therefore, the unloaded quality factor is 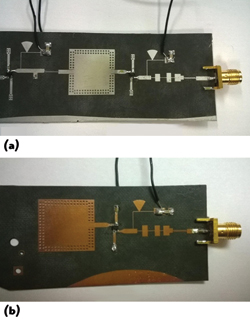 In this case, the oscillation is unstable and its amplitude will grow. It will continue to build as long as equation 5 is satisfied; however, the absolute value of the negative resistance, RIN, decreases due to the nonlinear performance of the active device until the oscillation reaches a steady state. When steady-state oscillation is reached, the relationships between RIN and RL, and XIN and XL are:

Oscillator design based on large-signal measurement can provide characteristics of oscillator performance such as power and harmonics. In this situation, the active device impedance ZIN is a function of input power and frequency. According to equations 6 and 7, the output matching network impedance must satisfy the condition ZL = - ZIN.

A short-step Chebyshev impedance transformer12 not only fulfills the output matching requirement at the fundamental, but also enhances harmonic suppression. Because the method and data of Matthaei12 can match only two resistive terminations, however, complex impedance matching is performed using simulation tools per Chen and Peroulis.13

Figure 2 is a top view of the active resonator oscillator. It includes an active SIW resonator, a transistor with output matching network, and an output coupling capacitor to prevent DC current flowing into the measuring instrument.

Figure 3a shows a negative resistance oscillator with an active SIW resonator fabricated on Rogers RT/Duroid 5880 with a relative dielectric constant εr = 2.2, loss tangent tanδ= 0.0009 and thickness of 0.508 mm. For comparison, a negative resistance oscillator using a passive SIW resonator is also fabricated, as shown in Figure 3b. The two resonators have the same physical dimension except that the active one has two terminations. The active SIW resonator uses Avago’s ATF-35143 pseudomorphic high electron-mobility transistor (PHEMT). Its DC bias voltages are Vgs = 0 V, Vds =2 V. Negative resistance for both the active and passive resonator oscillators is provided by Avago’s ATF-36163 PHEMT. The two ATF-36163 PHEMT’s gates are shorted because of the metallic via walls, and their Vds =2 V.

The output spectrums of the two oscillators are measured with a Rohde & Schwarz FSP spectrum analyzer. Figures 4a and b show the phase noise and second harmonic suppression of the active resonator oscillator. Its oscillation frequency is 10.19 GHz with an output power of 8.26 dBm, and second harmonic suppression is greater than 30 dB. In addition, phase-noise for the active resonator oscillator is -120.1 dBc/Hz at 1 MHz offset, which is almost 8 dB lower than for the passive one. It is apparent from Figure 4a, however, that phase noise of the active resonator fails to decrease further beyond 1 MHz offset. There are two causes, one is noise floor deterioration due to the active device’s noise figure, and the other is due to influences from external noise sources. The former may be alleviated through careful design of the active SIW resonator, and a metal shielded cavity will reduce the effects of the latter.

This work is supported by National Natural Science Foundation of China (Grant No.61201004) and the Fundamental Research Funds for the Central Universities (ZYGX2011J011).