Driven by the deployment of cellular base stations, both Freescale and NXP are seeing strong revenue growth in their RF businesses, only limited by the capacity to fully meet customer demand. In reporting third quarter financial results, each company pulled back the curtain to reveal that it’s a good time to be in the wireless infrastructure business, especially if you are an LDMOS PA supplier.

Freescale’s RF business is one of the company’s five segments that report revenue each quarter. In various investor briefings, the company has indicated that some 90% of RF revenue comes from the base station market and most of that from LDMOS PAs. Freescale claims their market share is twice that of their closest competitor, NXP. 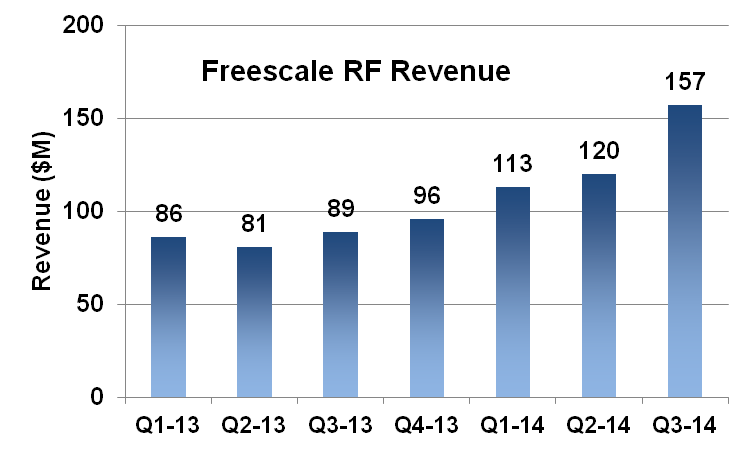 Greg Lowe, Freescale’s CEO, attributed most of the demand to China Mobile, with China Telecom and China Unicom beginning build-outs. He added “We’re also hearing from our customers about strong growth in other markets such as South America, in Japan and the United States, Europe and so forth.”

In addition to the upsurge in the global market, Lowe stated that Freescale is gaining share because of the superiority of their LDMOS performance, particularly LTE efficiency.

To meet the demand, Freescale has invested capital in their back-end operation to increase assembly and test capacity. Despite this, Lowe indicated that “lead times remain high, in the 20-plus week range right now.”

While NXP is the second largest supplier of LDMOS PAs for the base station market, their revenue is not as concentrated in power or base stations. We don’t know exact amounts, as NXP does not report RF revenue; it’s included with several other product areas in the Industrial and Infrastructure (I&I) segment.

I&I revenue in Q3 increased $28 million sequentially (18% growth), with base station OEMs driving the majority of the increase according to Rick Clemmer, NXP’s CEO. Revenue growth from “smart” audio products, part of I&I, was also strong. That means the base station market generated at least $14 million of the quarter-quarter growth. Clemmer sees base station demand continuing in Q4, with the company guiding I&I revenue to be up in the “mid single-digit range.”

Clemmer said that China LTE is not driving the majority of NXP’s growth. Feedback from customers indicates broad geographic demand. South America was strong prior to the World Cup in Brazil; now the Middle East and Africa are strong, with continuing expansion in the U.S.

NXP has also been struggling to ship customer orders, seemingly more so than Freescale. Clemmer acknowledged the ongoing difficulty: “I think we’ve talked all year about the fact that we’ve not been able to meet our customer commitments and created problems which we weren’t very happy about on an ongoing basis. While we’ve seen our ability to increase our capacity and obviously indicated in the numbers that we reported today and with the guidance for Q4, but the bottom line is I think we still are not able to meet completely our customers’ requirements. We still see a pretty healthy demand.”

While the long lead times for LDMOS PAs may be delaying orders for products with shorter lead times, it seems like a good time to be serving the base station market. Signs are the market will continue to be strong well into 2015.