The International Microwave Symposium (IMS), also referred to as Microwave Week or MTT (after the IEEE microwave society that organizes the symposium), held its annual gathering in early June with a return to the Seattle venue last visited by our industry en-masse in 2002. For those attending, the business on the exhibition floor mostly ranged from reasonable to robust, the technical program offered the latest results from industry R&D and academia and the Seattle weather could not have been more perfect.

The MTT-S reported a total attendance number of approximately 7500. This compares on par with the 7700 at IMS 2012 in Montréal. The booth staff was up slightly (3704 versus 3568) while the number of attendees (technical session and exhibition visitors) was slightly lower (3842 versus 4118). On the exhibition side, there were a total of 580 companies, 78 of which were reported by organizers as first time exhibitors.

From a 60,000 foot view, papers were organized into five tracks to help engineers get a better sense of which technologies are currently being developed (Active and Passive Components); how these technologies are being developed (Field and Circuit Technologies); where these technologies will be used (Systems and Applications) and what will come next (Emerging Technologies). The society also introduced several special panels and workshops this year (Death of GaAs Panel and Wireless Day Symposium) and hosted several notable social events. This year’s Women in Microwaves reception, which continues to grow in popularity and attendance, was collocated with the Ham Radio social at the Seattle Space Needle.

As the technical content at IMS has grown, the society leadership and this year’s local steering committee did an excellent job of organizing the structure of the program and social events. The effort to cater to students, young engineers and microwave’s female population is a trend that has been occurring over the past several years and is vital to a forward looking industry that needs to expand and engage a new generation of technologists.

And as the industry has evolved, IMS has come to represent the largest North American gathering of microwave professionals, many of whom interact at similar events throughout the year and across the globe including European Microwave Week, Asia Pacific Microwave Conference (APMC) and EDI CON (China). The diversification of gatherings and locations represents one industry trend that is spreading the development of microwave technology and business opportunities across borders and into new markets. As a result, IMS is increasingly attended by international delegates and exhibitors. The internationalization of the industry, discussed in the cover story of Microwave Journal’s MTT-S show issue (May) was clearly apparent in Seattle and represents another component in developing new engineering talent.

Many IMS delegates and exhibitors have been attending year after year, turning the event into an annual reunion with no shortage of familiar faces and a few facelifts. RFMD took the occasion to share the company’s new look and branding with its industry friends. TriQuint added a new tagline – Reach Further, Reach Faster™ and M/A-COM Technology Solutions is now simply MACOM. Among the new exhibitors were a number of smaller local companies that took advantage of the venue’s return to the Pacific Northwest. Many of these new exhibitors included component and subassembly manufacturers introducing new technologies and looking to make a name for themselves or companies that are tangential to the microwave industry (thin film and micro-assembly manufacturing, testing services, EMC/EMI solutions and materials).

Several sizable companies, which are perhaps better known for their products outside the microwave space and who just began exhibiting over the past couple of years, increased their presence at this year’s show. Companies such as National Instruments, Texas Instruments, Cadence and IBM have significantly increased their booth size and marketing impact at IMS, signaling their growing participation and influence in the RF/microwave market.

Another observable trend in the exhibition hall was the growing importance of device packaging as a competitive advantage for many companies while it is often an overlooked part of device performance by others. High power devices, transistors and diodes are being offered in low cost plastic packaging with power levels up to 100 W (pulsed). MACOM and Nitronex now offer GaN transistors in plastic surface mount packages and likewise, Freescale and NXP offer LDMOS transistors in plastic surface mount versions. This reduces costs significantly in applications where performance similar to more expensive ceramic packages can be maintained. MACOM and Aeroflex/Metelics have done a similar thing with diodes at relatively high frequencies and are still able to maintain performance.

Another new trend is in the area of 3D packaging as several companies now offer solutions utilizing stacked structures. A few examples include Crane Aerospace which offers 3D fusion bonding of laminate layers with devices sandwiched in between the layers, Nuvotronics which offers 3D AirCoax miniaturized microwave networks and 3D Glass Solutions which provides 3D features in a glass-ceramic substrate. One of the RF industry’s biggest announcements of the year was Qualcomm’s entry into the RF mobile front end market with the release of its new FEM featuring 3D packaging (featured in our June cover story).

The “Death of GaAs?” event run by Strategy Analytics on Thursday offered many varying views on the subject. It started with some market overviews of how GaAs has grown over the years and the looming threat of the Qualcomm CMOS front end which is expected to be out later this year. Several companies showed that CMOS PAs have caught up with GaAs in the high volume handset market, but WIN Semiconductor pointed out that the reality is that GaAs currently still dominates the market even with these newer CMOS PAs being widely available.

Most panelists agreed that CMOS PAs will continue to gain some market share but it will be a slow process as GaAs is still cost competitive and performs very well compared to other technologies. SOI and SOS switches are also replacing GaAs in many slots and will continue to do well in lower cost applications. SOI switches are widely replacing GaAs switches in handsets while GaAs continues to do well in higher performance applications. However, SOS switches are giving GaAs competition in the high performance area in some applications.

The DARPA presentation covered a program that is creating the best of all worlds by combining InP HBT, GaN and MEMS technologies on the same platform. GaN was also reviewed as it is replacing GaAs in some of the high power applications with its higher power density. GaN might actually take more market share from GaAs in the near future than Si, but they are both eating away at GaAs market share. Bottom line, GaAs is still a competitive technology in many areas but is losing some market share from both Si and GaN technologies.

Several companies and marketing analysts took the opportunity to present their perspective on market trends impacting the industry. Regional trends for defense spending were discussed in a special session on “Defense Market Opportunities for RF Technologies” presented by Strategy Analytics. SA analysts are forecasting a decline in European and North American budgets in contrast to the projected growth in spending expected from the Asia-Pacific, Middle East-Africa and Caribbean and Latin American regions. While sequestration and austerity measures in the U.S. and Europe are expected to impact the rollout of next-generation platforms such as the F-35, the speaker emphasized that technology will be an important differentiator between suppliers and that there will be a continued emphasis on improving capabilities in the areas of radar, electronic and communications. 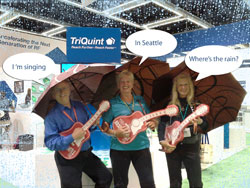 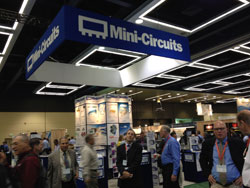 Investing in technology to maintain a competitive advantage was the underlying theme at a press event held by Agilent Technologies. General manager Greg Peters presented an insightful long view of U.S. defense procurement, highlighting trends in spending levels and revenue allocation over time and events (Cold War, Iraq, Afghanistan, etc.). Emphasizing the DoD’s shift toward complex integrated, multi-platform systems and the evolving technology needed to support these systems in the field, Peters painted a future of test systems for the defense sector that will be focused on faster measurements, better performance and able to address the cost of ownership.

While sequestration could be a driving force in the development of new technologies that will help companies differentiate themselves and assume a competitive edge, it is also forcing the DoD to keep older systems operational. This trend is driving a second market for the microwave replacement components that are needed to keep aging systems alive. While technology trends continue to push higher performance and reduce size and costs, custom engineering is also required to design new products to fit into pre-existing sockets. Custom engineering is the lifeblood for a large number of companies in the microwave industry and events such as IMS provide the face-to-face interaction that leads to chance encounters and discovery of new opportunities.