Historically, the long haul market has not created much excitement – the big iron radios were used most often in project based deals, placed at aggregation points towards the core of the network due to their high power and high capacity.  Although they were not used as much as short haul radios, their price points were much higher, starting at around $12,000 - $15,000.  As packet based protocols and higher levels of capacity became the de facto requirement for short haul microwave radios, long haul radios followed suit, increasing capacity and adding Ethernet services either through packet or hybrid platforms.

Although global long haul revenue pales in comparison to the revenue generation from their short haul counterparts, long haul radios are a vital and steady market for the handful of manufacturers that sell them worldwide.  Driving this steady market is 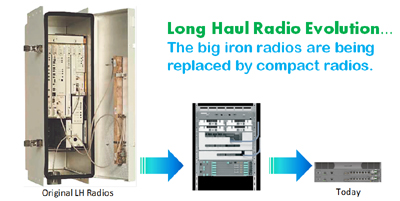 Long haul radio applications run the gamut from backhaul to interconnecting buildings.  Key verticals include utility companies, government agencies, enterprises, public service agencies, ILECs, and mobile operators. Private networks use long haul to connect remote locations to a headquarters, for redundant links, or for public safety and security and surveillance. Mobile operators use them nearer the central office to transport the traffic generated from cell sites on the edge back to the core.  Thus, due to their mission critical applications, long haul radios need to be highly reliable with high capacity data services.  To achieve the 300 Mbps+ capacity often required, most long haul radios support technologies like XPIC.

The Short List
There are a handful of vendors that share the long haul North America market space, with Alcatel Lucent and Aviat being the traditional leaders.  There are only three Tier 1 networking vendors, Alcatel-Lucent, Ericsson, and NEC that offer long haul radios for the North American market, with the remaining main players (Aviat, Ceragon, Exalt, and MNI) being pure play radio vendors.

Typically in microwave, an end-to-end mobile network solution is critical to having substantial market share since often times mobile operators drive microwave revenue through bundling backhaul into RAN equipment RFI’s.  Therefore, those vendors with a RAN solution have a clear advantage because they are able to respond to RFQs for future backhaul needs before those without a RAN offering even know about the project.  However, North America’s long haul market is unique especially when compared to the global microwave market, as non-mobile verticals typically generate the bulk of long haul sales, thus making that end-to-end mobile network solution not so critical. 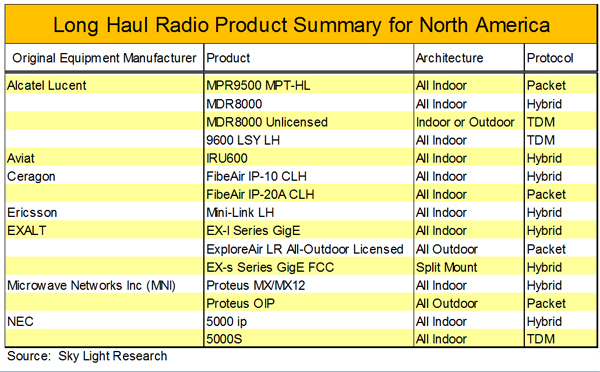 The Swing Factor
However, that may be changing, especially if the characteristics that drove the market in 2012 continue.  In 2012, a major shift occurred and packet long haul radios out shipped TDM and Hybrid for the first time ever.  The driver behind that shift was driven by mobile operators.  Historically, mobile operators were a factor in long haul revenue generation, but not the key vertical, as they are for short haul radios. 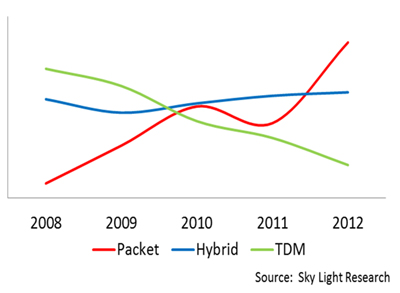 A couple of years ago, Alcatel Lucent introduced a long haul version for its MPR9500 platform, known in the North American market as the MPT-HL.  This addition created a very high power, long haul, packet based, compact long haul radio.  The radio is similar in size to short haul radios, opening up a new application for long haul radios because now long haul can fit almost anywhere in the network and is not limited to areas with larger real estate.  Other vendors also offer long haul packet radios in a smaller form factor and many of the hybrid long haul radios are configured and sold as all packet per the customers’ request.   For example, Ceragon, Aviat, Exalt, and MNI each have a compact radio that can be configured as packet.

Packet is where it’s at
Radios with TDM services are still required in many cases due to the existing TDM in networks; however, the demand for pure TDM radios is limited due to the increasing presence of Ethernet in private and public networks.  This movement is making hybrid radios a more strategic choice over TDM radios.  Further to this point, long haul radios are used at aggregation points in the network and the chances of having various types of media coming together is much greater than it was a few years ago.  Hybrid radios, by definition, can natively service the various traffic types making them an important piece in the microwave tool kit.

The list for long haul manufacturers extends beyond those that play in the North American space, and savvy manufacturers will see the growth that long haul is experiencing in North America as LTE started to deploy and consider developing ETSI compact, packet, high power, long haul radios in order to cash in on the potential trend in other parts of the world as LTE cycles commence.

Sky Light Research has recently published a comprehensive study on the transformation occurring in the North America long haul market.  The report, prepared in presentation format, includes 55 slides filled with vendor and product analysis, forecasts by vertical segments as well as forecasts for Canada and USA, packet long haul, TDM long haul, and Hybrid long haul.  Market trends also are discussed. To order a copy of this study, please contact Sky Light Research at the email below.

About Emmy Johnson and Sky Light Research:  Emmy is the Founder and Principal Analyst of Sky Light Research, a third-party analyst firm specializing in wireless point to point mobile backhaul technologies such as microwave, sub 6 GHz, and millimeterwave radios.  The firm’s popular services include quarterly market share reports and forecasts.  Sky Light Research was founded in 2001 and is located in Scottsdale AZ, USA. For more information, please email info@SkyLightResearch.comor call +1.480.563.2251.

Emmy is the Founder and Principal Analyst of Sky Light Research, a third-party analyst firm specializing in wireless point to point mobile backhaul technologies such as microwave, sub 6 GHz, and millimeterwave radios. The firm’s popular services include quarterly market share reports and forecasts. Sky Light Research was founded in 2001 and is located in Scottsdale AZ, USA. For more information, please email info@SkyLightResearch.com or call +1.480.563.2251.