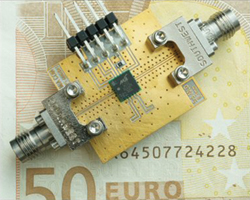 Figure 1 10 MHz to 40 GHz MIC module mounted on an application board.

Applications, from instrumentation to electronic warfare to radio astronomy, require simple, low cost, broadband amplification. A commercially available bare chip distributed amplifier is hard to apply and purchasing a complete solution can be expensive. This article demonstrates a state-of-the-art monolithic integrated circuit (MIC) overmold on a laminate module that is easy to use and low cost. It covers a 12 octave continuous bandwidth, 10 MHz to 40 GHz, with 13 dB gain, 50 Ω I/O match and +20 dBm power output. The MIC module integrates the DC blocks and bias network. Additional pins allow access to a temperature compensated power detector and 20 dB of gain control. With the optional 2.4 mm connector application board, a user has an amplifier that covers that full band with only +5 V, 190 mA and –5 V applied.

Most commercial applications for RF and microwave have predetermined narrow frequency bands. However, in many military, industrial and scientific applications, the frequency of interest varies over a wide bandwidth. This includes such environments as characterization, modeling, radio astronomy, radar detection, instrumentation and reliability testing. Some applications require extreme bandwidths, since users not only look at a fundamental frequency, but also harmonics.

Numerous vendors provide narrow band ASICs for consumer and commercial applications. However, obtaining a simple broadband amplifier is challenging. If an off-the-shelf distributed MMIC amplifier is bought, the design of the bias, control and assembly can be difficult. If a complete solution is used, it can be very expensive. Presented in this article is an alternative approach with a MIC module solution that is easy to use, low cost and covers 10 MHz to 40 GHz amplification. 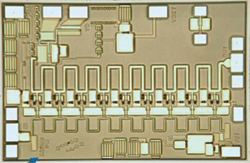 Figure 2 A GaAs distributed amplifier MMIC is the heart of the module.

The MIC module is housed in a 5 × 5 mm plastic on laminate construction that is compatible with modern reflow and wash reliable. Typical usage is on a 28 mm application board with 2.4 mm connectors and DC pins, as shown in Figure 1. A typical gain of 13 dB was measured on this module, while still maintaining a 50 Ω I/O impedance from 10 MHz to 40 GHz. The dynamic range was large, with the lowest noise figure at 2.8 dB and highest output power greater than +20 dBm. DC requirements are +5 V, –5 V and 190 mA. The MIC module also integrates gain trim control and power detector.

At the core of the MIC module is the same basic 0.15 micron gate PHEMT distributed amplifier found in many optical and catalog products as shown in Figure 2. A nine section construction has constant impedance inter-sections transmission lines and cascode stacked FETs. It has integrated simple bias networks and ESD protection. Unique to the MMIC is a temperature compensated power detector. It is integrated into the “termination” load on the distributed amplifier, in order to not disrupt the inherent bandwidth of the traveling wave. The amplifier also utilizes a cascode stage element that allows an RF isolated DC control pin for effective gain control. The I/O match is largely not affected over gain control range, due to the excellent isolation available in a cascode. The resulting MMIC is very process and temperature tolerant, making an excellent base for a complete module.

In order to increase performance and lower cost, the design approach for the MIC module was holistic in nature. Ultra-low cost plastic QFN was not an option, since series elements, such as DC blocks, bias choke and resistors are hard to incorporate into a lead frame. Brazed leads on ceramic or LTCC substrates are too expensive. Driven by cell phone technology, it was discovered that recent advances in laminate low loss dielectric materials allow the construction on a high performance substrate perfect for this application. The final result was a Rogers RO4003 two-layer 0.2 mm laminate based PCB, with 0.2 mm copper filled via grounds.

Mounted on the laminate substrate are SMD capacitors, resistors and inductors. These SMD elements are used primarily for DC block, DC chokes and DC supply bypass. They are not integrated into the MMIC, since that is a very inefficient use of expensive real estate. Instead, many vendors’ SMD products were characterized and de-embedded to 50 GHz, often beyond the vendors’ own specifications. With an accurate library, a full module could be simulated and eventually built. This technique was critical for the design of a wide band bias tee. It was decided not to use the traditional conical inductor due to its cost, size and reliability. Instead, an SMD 0402 replacement was used that was not only lower in cost, but had better performance. Switching to an SMD also allows plastic over mold of the laminate, further reducing cost and improving manufacturability. 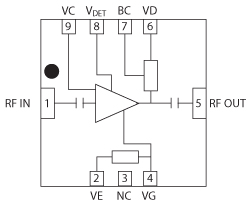 The net result is the efficient module shown in Figure 3. The correct cost/performance balance between SMD components and integration is achieved. The laminate allows the top metal to be patterned for optimal performance. The standard SMD sizes and construction allow assembly, using high volume techniques. In the final step, the entire module is over molded with a low loss mold compound and technique that ensures wide bandwidth without compromise of reliability or quality.

The MIC module is configured with RF I/O signals on two sides and DC I/O on the other two sides. A top view configuration is shown in Figure 4.

The pins are designated as:

For proper operation, a DC voltage is applied at the VE (–5 V) and VD (+5 V) pins in that order. The optional VG pin was used to override the automatic VE bias network to hard set the gate. Adjusting VG from –0.2 to –0.6 V changes the quiescent current. When VG is used, the VE was left unconnected.

The VC pin was left unconnected, unless gain control or output power limiting was desired. When used, the gain reduction was almost linear, with VC between 0.1 to –0.8 V. The VC pin was driven below –1 V or above 1.2 V, due to internal ESD protection that kicks in. The nominal open circuit voltage at the VC pin was 0.8 V. Reducing VC below 0.8 V also reduced Id, gain, P1dB and Psat. 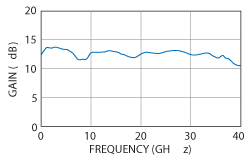 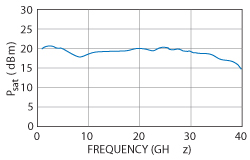 The BC pin is typically left unconnected, unless gain bandwidth and shape change are desired. This article will not go into these details, due to space limitation. The input and output pins are internally DC blocked. It was found that not more than ±12 V should ever be present on these RF only pins. The backside paddle of the MIC module was connected to ground with as many vias as possible to maximize high frequency performance, thermal dissipation and stability. Typical applications would use the MIC module as a broadband amplifier. In that case, the 5 × 35 mm MIC module would be placed between 50 Ω lines and only the VD (+5 V) and VE (–5 V) need be applied. 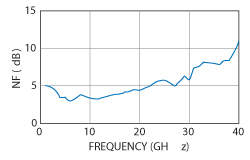 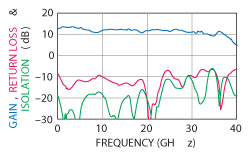 An application board was used for measurements. This board was also found to be very useful for customer evaluation or even laboratory or industrial applications. For measurement, the MIC module was soldered onto a 4-layer, 28 × 25 mm laminate application board. Also included on the board are DC supply bypass capacitors and a DC pin. A ferrite bead was placed in the VD supply line and this allows operation down to 10 MHz. 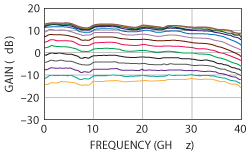 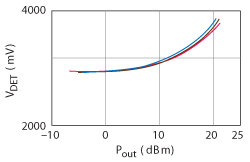 Typical measurements were made by directly probing the board with 400 µ GSG probes. Alternatively, Southwest 2.4 mm (DC to 50 GHz) cable adapters were attached to the board. Figure 5 demonstrates a 13 dB typical gain over 40 GHz of 3 dB bandwidth. Figure 6 shows nearly 20 dBm saturated power over most of the band and Figure 7 shows a typical noise figure less than 6 dB across band. Figure 8 shows the application board performance with 2.4 mm connector and demonstrates over 12 dB gain, –12 dB return loss and over 25 dB isolation (K is >1). Figure 9 shows the gain control available with the optional VC pin and Figure 10 shows the typical power detector output over –40° to +85°C at 2 GHz. Figure 11 shows the low frequency performance, using the application board and ferrite bead. Figure 12 demonstrates little gain change over temperature, –40° to +85°C. 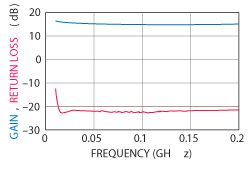 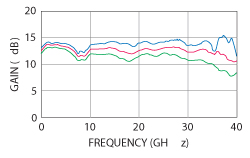 Many applications require extremely broad bandwidth amplifiers. While several vendors sell chip distributed amplifiers, assembly and bias for these in an application can be difficult. Complete solutions can be very expensive. This article has demonstrated a monolithic integrated circuit on laminate and overmold construction. It is low cost and easy to use for applications requiring 10 MHz to 40 GHz bandwidth or less. Measured performance shows 13 dB typical gain and +20 dBm of output power. Matching is 50 &ohm; with typical return loss better than 15 dB. It requires dual DC supplies: 5 V (190 mA typical) and –5 V (< 1 mA).

The MIC module pushes SMD technology by using an integrated, ultra-broadband, bias choke, DC blocking and bypass capacitors. Some other features include: a gate bias adjust pin to change current setting for power or temperature; a gain trim control pin that allows 15 dB of gain control and a temperature compensated detector pin that provides a DC voltage in relation to output power.

The MIC module in this article has demonstrated enough gain, power and low enough noise figure to be used in instrumentation front ends and buffer applications. It also has very flat response with low group delay distortion so it can be used in pulse applications. For higher gains, multiple amplifiers may be cascaded. It also makes a very good low cost optical driver capable of delivering to 8 V p-p into 50 V.

The authors wish to acknowledge M/A-COM management for the continued support in research of ultra-wideband MMICs and modules.