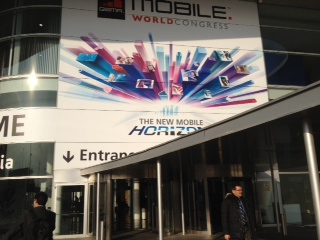 This was the first year at the new venue for Mobile World Congress taking place at the Fira Gran Via. The new venue has  eight large halls laid out in a linear fashion (hard to know if you count Hall 8 and 8.1 as two of not).  The top floor ran over all of the halls making it easy to get from one place to the next despite the large crowds of people.  There were also nice outdoor garden areas along the concourse for networking.  The show formally announced that 72,000 people attended the show making it by far the largest wireless show in the world.  The show was well run from all accounts that I heard.  We mostly visited Halls 2, 6 and 7 that contained almost all of the RF/microwave companies that we visited at the exhibition along with a few offsite visits for those that did not have booths.  Here is a quick summary of the show – we will have a full report on our web site from next week including videos. 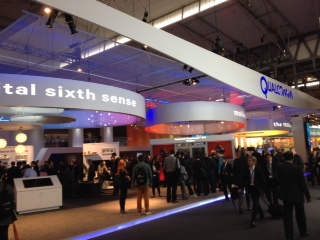 The biggest news was QualComm releasing information just prior to the show that they will be producing their own single chip RF front-end.  This is reported to meet the requirements for 4G/LTE in a single CMOS chip that includes envelop tracking and antenna tuning.  This could have a huge impact on the industry if the device turns out to meet all of the performance requirements it is reported to have.  I saw a very small display of the device but they really were not giving out very much information about it.

This year’s biggest buzz words were carrier aggregation and small cells (that is for the microwave world, the cellular world is LTE and Cloud-based services).  The major themes for test/measurement included carrier aggregation, 802.11ac, MIMO, LTE, PIM small cells and VoLTE.  Agilent, R&S, Anritsu, Aeroflex and NI were covering most of these subjects with Anritsu and Kaelus specializing in PIM testers. Azimuth, Spirent and Anite were featuring the lab and field measurement systems with their channel emulators and MIMO OTA.  EMScan was featuring an interesting small desktop very near-field antenna measurement system that shows the radiation pattern in real-time. A new company for me was Xixia which does network testing and has real time capture techniques for analyzing wireless hot spots. 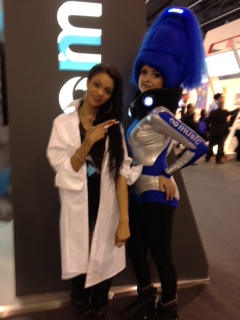 The device companies again are dealing with carrier aggregation, small cells and 802.11ac along with higher efficiency PAs, antenna tuning, power management, filtering and higher levels of integration.  Skyworks, TriQuint and RFMD were all featuring their solutions in these various areas as the larger handset device providers (I did not see Avago and Anadigics was only available in a meeting room).  Peregrine was featuring their high performance switching solutions along with their digital tuning capacitor products for antenna tuning.  WiSpry offers MEMS devices that perform the same function and have developed a chip level solution.  Maxim was displaying their RF to bits solutions including a 3G/LTE for small cells and 6 GH synthesizers.  TI was also having meetings nearby talking about their full RF/baseband solutions for the same market.  NXP was featuring high power Doherty amps, wireless charging solutions and MMICs for small cells.  CommScope was also offsite talking about their antenna solutions as the only tier one supplier to the Chinese market in this area.

I also had a chance to visit the WiGig Alliance which will merge with the WiFi Alliance soon and they have certified their standards with WiFi 802.11ac.  Another interesting meeting was with the UNH Interoperability Lab which has setup interface standards for the RF industry.  They developed the MIPI and DigRF standards along with the RFFE standard for the RFICs to talk to the RF front-end and the eTrak standard is being worked for envelop tracking. 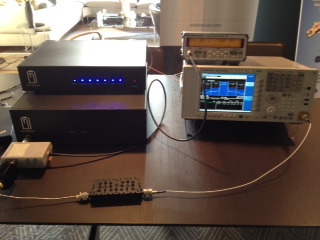 Finally, I had the chance to visit Cree and Eta offsite as they were displaying some possibly ground breaking PAs with 70% efficiency (probably about 60% efficiency in actual use) which is a huge improvement over today’s 40-45% efficiency range for basestations.  Eta is a new startup out of MIT that developed Asymmetric Multilevel Outphasing that is similar in some ways to envelope tracking but still maintains wide bandwidth by reducing the resolution of voltage levels used.  They are using Cree’s GaN devices and plan to introduce their product to the basestation market first followed by the handset market.  Like the Qualcomm news, this also could be a game changer if they are able to successfully bring it to market and meet all of the performance needs.

It was an exciting show this year with many technologies evolving quite rapidly.  It will be interesting to keep following these stories and themes for the rest of the year.