Engineer leaves his work behind in a bar

Last month in Silicon Valley a very important cell phone was left behind at a bar -- what is widely believed to be a prototype of the new iPhone that Apple's officially going to release in a couple of months. The phone wound up in the hands of Jason Chen, the editor of the technology website Gizmodo.com.

In the news report, this phone was described at one point as Apple’s new 4G phone. Which initially grabbed my attention since I immediately thought they were talking LTE (whoa, that’s news), but I have since come to realize, that they were talking 4th generation iphone operating system. Oh well, it was still worth visiting the Gizmodo site and getting the skinny on the whole story and what the web site reporter’s investigation of the phone revealed before they returned it to Apple.

Turning back to RF/microwave related concerns, I reviewed the gizmodo story with an eye out for relevant information. Here are some snippets about the new iPhone that relate to its radio. Among the most visible changes, is one of functionality over looks. The back is entirely flat, made of either glass (more likely) or ceramic or shiny plastic. Why the plastic back?

"The plastic back is the most obvious of the design choices. The iPad, with its all aluminum back, has seen its Wi-Fi reception radius reduced. The iPhone 3G version comes with a large patch on the top, probably big enough to provide with good reception. But the new tiny iPhone doesn't have the luxury of space: It needs to provide as much signal as possible using a very small surface. Industrial designers and fashionistas might be dying to get rid of the plastic back, and go iPad-style all the way, but the wireless reception is the most important thing in a cellphone. A necessary aesthetical-functional trade-off."

The “editors” then took apart the phone. Once open, they noticed that the battery takes up around 50% of the phone, give or take. Diving deeper became much trickier. There are a total of around 40-50 screws inside the phone, positioned at various angles that were almost frustratingly impossible to get to. The main logic board is one very weird piece of this puzzle. Unlike the iPhone 3GS teardown, which revealed a large logic board along with another part down by the dock connector, this design only has something maybe 1/3 of the size, along with one or two extraneous parts. Basically, the guts have shrunk drastically. The board was encased in metal all around so nothing could get through. EMI or IP protection? 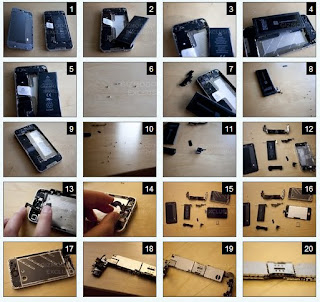 Unfortunately, the editors failed to report on the front-end technology, changes to the antennas, power amps, switch modules and other RF components, etc. Oh, well, that’s information for a different audience than they were writing for, I suppose. We need a microwave editor for that. I'll have to ask my publisher for the new iPhone when it's available legally. The chances of me getting one are about as great as me being able to rip it apart.

Perhaps the bigger lesson is not to leave your work behind at the bar.