1.  TriQuint and Anadigics just announced (only a day apart) the first dual band PA duplexer (PAD) modules.  They occupy about the same board space previously taken up by a single band PA module but now support 2 bands (4.5 x 6 mm).  So a typical quad band solution (2 PADs) occupy less than half the footprint as current discrete solutions.  The PAD module contains two power amplifiers with associated switching circuitry and two duplexers in a compact module.  Both companies released a family of 3 devices covering various band combinations.

We talked with TriQuint in detail about their PAD modules, and it was interesting to learn that they have developed a BiHEMT MMIC with 2 power amplifiers and the switching circuitry integrated on a single chip. 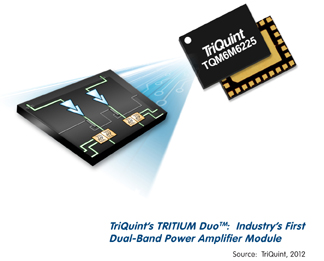 In addition, the module integrates high-performance BAW and SAW duplexer capabilities.  Significant space savings and improved performance are achieved through wafer level packaging to reduce the footprint of the duplexer and flip chip mounting of the PA MMIC (Cu bumps), so there are no wire bonds for any of the chips.  This obviously reduces the footprint and the flip chip mounting improves the thermal performance along with reducing RF radiation from the wire bonds.

Javelin Semiconductor also recently announced that Samsung Electronics had selected Javelin’s JAV5501 Band I PA for their new Galaxy smartphones. The initial Samsung phone model available with Javelin’s PA is the Galaxy Ace Plus, a mid-range Android-based 3G smartphone. The JAV5501 is the first CMOS 3G PA in volume production with a leading smartphone manufacturer according to the release. Javelin claims their PAs achieve excellent linearity and have the best noise performance of any 3G PA on the market.

3. Nujira has introduced an envelope tracking solution for handset PAs which could dramatically improve PA efficiency.  Nujira recently launched the first IC in its Coolteq.L product family of Envelope Tracking power supply modulators for mobile handsets. The NCT-L1100 has been designed to reduce wasted energy from PAs in mobile handsets by more than 50%, cutting heat dissipation and extending battery life. It has been able to demonstrate power conversion efficiencies in excess of 80% and supports the maximum 20 MHz channel bandwidth of LTE - (about 50% efficiency in the handset PA). The technology has already been validated through system integration with two major platform chipset vendors.

These companies will be at MWC 2012 demonstrating and discussing their technologies. Microwave Journal editors, David Vye and Richard Mumford, will be on site reporting about these and other hot topics at the show.  It should be an interesting show.