EuMW 2010 Exhibition Report: The lay of the land

David Vye
European Microwave Week was held in the CNIT convention center in the newer business center that lies to the west of the city’s center, a straight shot down Rue Charles de Galle, about three and a half miles from the Arc de Triomphe. The Center of New Industries and Technologies, or CNIT, is one of the first buildings to ever be constructed in La Défense, Paris. It is a palace for the French Congress that houses the main offices and also functions as a convenience store for the congressmen and their visitors. The initial construction of CNIT was completed in 1958 and the conference and exhibition center provides a unique and interactive place for people to meet and exchange information. 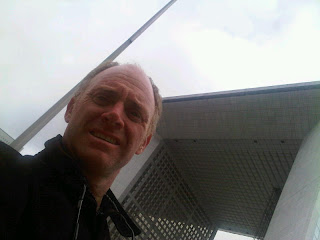 The CNIT is in the plaza at La Defense, which is also home to the Grande Arche - a modern take on the Arc de Triomphe.
CNIT Paris is the biggest conference and exhibition center in Europe, containing more than 3 Amphitheatres, 21 adaptable rooms, and has over 17,000 square meters of exhibition area. The exhibition, which opened Tuesday, was in the lower regions of the convention center and the relatively low ceiling either gave the show an intimate or claustrophobic feel, depending on one’s perspective.

Without the usual signs draped from the ceiling above the larger exhibition booths, attendees were forced to navigate the space at the floor level, changing the scale of the entire show - for better or worse. Finding certain exhibitors may have been harder in some cases, but the layout may also have helped force attendees to be more aware of their surroundings and discover vendors they might otherwise have breezed by.

The entrance to the exhibition space was dominated by test and measurement equipment vendors – Agilent, Rohde & Schwarz and Anritsu. Agilent commanded the front of the exhibition hall with an impressive stand filled with no less than eight demo stations, meeting room and a half dozen additional demo stations for partnering companies including Maury Microwave, AMCAD, Anteverta Microwave and SATIMO.

Adjacent to Agilent was the European T&M home team of Rohde & Schwarz, also displaying the latest in their test solutions. Stage left of R&S was Anritsu, a manufacturer which has had a flurry of new product releases over the past several months, much of which was on display for the first time at EumW. Anyone shopping for test equipment could easily spend their time in this one area of the trade show. 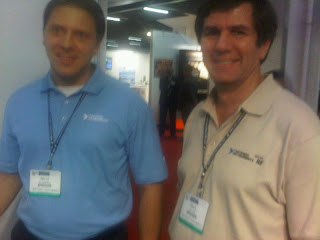 The staff at National Instruments proudly show off their new PXIe-1082 which can be configured into a small but fast (400usec/pt) multi-channel VNA (10 MHz to 6 GHz), targeting autotest applications.

Greeting visitors beyond the test and measurement equipment were the majority of software vendors CST, AWR, Ansys (Anosft), Mician, Sonnet, National Instruments and MIG to name a few. Slightly deeper into the heart of the exhibition floor, the types of vendors quickly diversified to the Integrated Device Manufacturers (TriQuint, M/A-Com, Analog Devices, Hittite, NXP and Mitsubishi), passive components, cable, connector manufacturers and material suppliers. One could also find other peripheral test products from VTD, NMDG and Tektronix/Mesuro’s non-linear characterization test equipment and software to turn-key life test solutions from Accel-RF. The complete list of vendors is available on the European Microwave Week web site (http://www.eumweek.com/2010/MapYourShow.asp) and Richard Mumford, our international editor and I will be posting our reports on meeting with various vendors over the next week.

While the floor traffic was not exceptionally crowded, it was respectable and constant. In conversations with exhibitors, most were happy with the quality of people they met at the show and many of them were either closing deals or making worthy new contacts. While many exhibitors were not introducing new products explicitly for this event, many had new products that had never been seen by this show’s attendees. Combined with a “better than last year” economic outlook, most exhibitors were poised for growth… and even vocal about it. That is certainly a 180 degree turn around from 2008, when the crisis had just hit and no one knew what the future had in store. 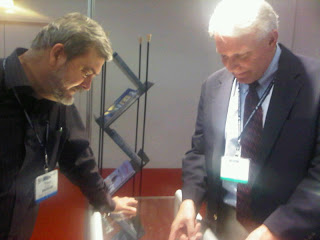 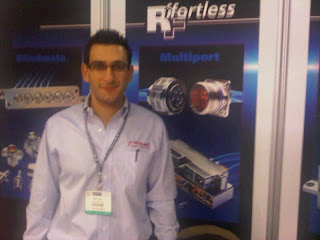 SV Microwave shows off its connector wares to a fellow exhibitor
With the conferences on a separate floor, it was not immediately apparent how many delegates managed to get over to the exhibition. The conference organizers did promote the exhibition to delegates during the plenary session and with few complaints from exhibitors, I am assuming most ventured into the exhibition at some point during the week. To summarize, the general feel of the show, it was upbeat if not giddy and the majority of vendors will likely go to next years' show in Manchester UK. All in all, I would say this year's event "got the intended job done". 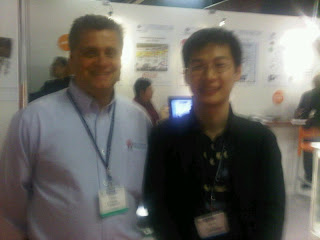 Tom Arthur of Valpey Fisher poises for the press alongside a EumW delegate.