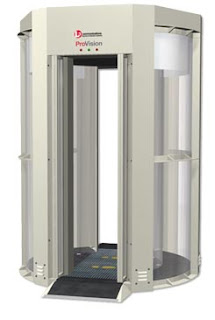 Thanks to the “don’t touch my junk” traveler, most of the public is now aware of the controversy over the body imaging technology being employed at various airports (65 as of October 2010). Two types of body imaging technologies are actually employed. The first one known as Backscatter X-ray is an advanced imaging technology that detects the radiation that reflected from the target. . Traditional X-ray machines detect hard and soft materials by the variation in transmission through the target. A competing technology is millimeter wave scanner which produces a 3D image whereas the backscatter x-ray 2D image. The airport security machines are also referred to as "body scanner", "whole body imager (WBI)", and "security scanner".

Its oddly humorous to see microwave technology back in the mainstream news (I considered the Apple iPhone antenna design flop to be a microwave story). In August of 2006 - Endwave announced an agreement to manufacture a complete RF system for a portal scanner used in a variety of security applications. The company would fully integrate and test the active RF subsystems which form the vertical electronic scanning array (or RF mast). Once assembled into the mechanical housing, each RF mast rotates 180 degrees around a person standing in the portal, providing a full 360 degree scan of the body within a matter of seconds. These masts would incorporate a full suite of Endwave switch arrays and transceivers, along with the associated cabling and surrounding framework that holds the scanning antennas onto each side of the portal.

In August of 2008, the Microwave Journal discussed this technology with an Endwave executive in our Executive Interview series:

MWJ: One interesting millimeter-wave application is “whole body imaging” that is being developed by L3 Communications for security and detection systems useed in places such as airports and government facilities. What’s Endwave’s contribution to this system and will they eventually replace metal detectors?

MH: I think our relationship with SafeView (part of L-3 since they were acquired in 2006) is one that deserves some special attention. We initially began our relationship with this private Santa Clara start-up by designing the Tx/Rx modules that went into their first generation scanner. This was straightforward for us, given our leadership in telecom transceivers and the similar technology and manufacturing processes used in our core business. Soon after, we were awarded the switch modules that allow the transmit signal to quickly switch between antenna elements and scan the body from floor to ceiling. Still later, SafeView awarded us the entire RF “mast” – or chassis, of which there are two inside any ProVision™ portal. These 7-foot tall chassis include all of our electronics, plus all the associated cabling, connectors, and metalwork. We integrate all that, run final test, and deliver these large masts to L-3 SafeView where they do the final integration into the portal and ship it out the door. So you can see we are far more than your everyday module supplier.

In April of this year, the Transportation Security Administration Chief, Kip Hawley, publicly announced that the TSA was going to ramp up purchases of millimeter-wave checkpoint security equipment. Specifically, the L-3 SafeView ProVision™ portals were singled out for deployment in many US airports. During Q2 of this year, the TSA began deploying 38 ProVision™ scanners in LA, Baltimore, Denver, Albuquerque, Dallas, Detroit, Las Vegan, Miami, and New York’s JFK airport. Even more encouraging were comments from other TSA officials stating that the scanners could eventually replace metal detectors at the nation's 2,000 airport checkpoints and the pat-downs done on passengers who need extra screening. In addition to these airport checkpoint deployments, L-3 has publicly stated that scanners are already used in many different locations, including a few courthouses, jails and US embassies, as well as overseas border crossings, military checkpoints, government buildings and some foreign airports such as Amsterdam's Schiphol. So, it will be difficult for anyone reading this article to NOT see these millimeter-wave portals if they do airline travel. That should be exciting to our entire industry, as it’s sort of like “millimeter-waves going mainstream”.

MWJ: That is very interesting and I look forward to seeing this technology showing up in airports, especially if it means getting through security faster.

So despite the benefits, the public and TSA official need to resolve the objections people have to machines that can look through clothes. 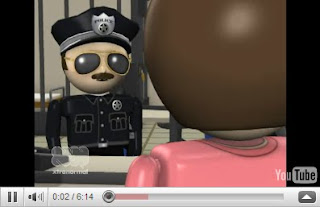