Microwaves and the Universe

David Vye
In cosmology, cosmic microwave background (CMB) radiation (also CMBR, CBR, MBR, and relic radiation) is a form of electromagnetic radiation that fills the universe. Unlike a traditional optical telescope, whereby the space between stars and galaxies appears pitch black, the radio telescope, exhibits a faint background glow between celestial bodies, almost exactly the same in all directions, that is not associated with any star, galaxy, or other object. This glow is strongest in the microwave region of the radio spectrum, hence the name cosmic microwave background radiation.

Most scientists believe the universe was created in the Big Bang around 13.7 billion years ago. Stars and galaxies started to form around 300 million years later. Our Sun was born around five billion years ago, while life first appeared on the Earth around 3.7 billion years ago. The CMB dates back to 300,000 years after the Big Bang and has now cooled to around -270 degrees C. Precise measurements of cosmic background radiation are critical to cosmology, since any proposed model of the universe must explain this radiation. The CMBR has a thermal black body spectrum at a temperature of 2.725 K, thus the spectrum peaks in the microwave range frequency of 160.2 GHz, corresponding to a 1.9 mm wavelength. This holds if you measure the intensity per unit frequency, as in Planck's law. If instead you measure it per unit wavelength, using Wien's law, the peak will be at 1.06 mm corresponding to a frequency of 283 GHz.

Nasa’s Wilkinson Microwave Anisotophy Probe (WMAP) is a NASA Explorer mission that launched June 2001 to make fundamental measurements of cosmology -- the study of the properties of our universe as a whole. WMAP is responsible for mapping CMBR and has been stunningly successful, producing our new Standard Model of Cosmology including the first fine-resolution (0.2 degree) full-sky map of the microwave sky.


Concentric circles discovered in cosmic microwave background radiation (CMB) – the after-effects of the Big Bang – display evidence of events that took place before most scientists believe the universe came into being. The recent controversial finding points to the existence of a universe that did not begin 13.7billion years ago, as is generally accepted, but is instead a cycle of so-called aeons. The discovery has been posted online on the website arXiv.org by respected scientist Professor Roger Penrose from Oxford University and Professor Vahe Gurzadyan from Yerevan State University, Armenia. 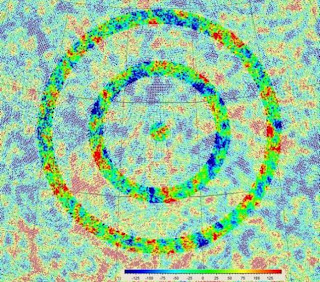 But Penrose and Gurzadyan argue that evidence unearthed by WMAP shows imprints in the radiation that are older than the Big Bang.. They say they have discovered 12 examples of concentric circles, some of which have five rings, meaning the same object has had five massive events in its history. The rings appear around galaxy clusters in which the variation in the background radiation appears to be strangely low.


The research appears to cast aside the widely-held 'inflationary' theory of the origins of the universe, which claims the universe began with the Big Bang, and will continue to expand until a point in the future, when it will end.
They believe the circles are imprints of extremely violent gravitational radiation waves generated by supermassive black hole collisions in a previous aeon before the last big bang.

Penrose told the BBC: 'In the scheme that I'm proposing, you have an exponential expansion but it's not in our aeon - I use the term to describe [the period] from our Big Bang until the remote future. 'I claim that this aeon is one of a succession of such things, where the remote future of the previous aeons somehow becomes the Big Bang of our aeon.'