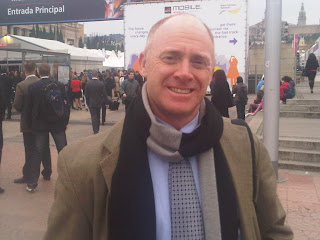 From our hotel just off La Rambla in the heart of Barcelona, Publisher Carl Sheffres, European editor Richard Mumford and I take the metro to Place Espanya among a sea of black suits, which must be the official business attire color for those attending Mobile World Congress. At the top of the salida (exit), we stop for a quick photo opportunity. Anticipating a mob at the registration desk (attendance estimates are north of 50,000 attendees) each of us had already obtained our passes the day before and so with passes in hand the three of us glide past the front gate security.

Mobile World Congress is one of those mega-events on par with Electronica in terms of scope and size, CES in terms of style and cool factor. The congress is devoted to all things mobile, which has transformed from the early days of cell phones to today’s smart phones and is evolving toward a future that connects the entire planet to the internet via mobile devices. Connected tablet devices, cloud computing, HD and 3D mobiles and some seriously powerful processors being stuffed into mobile devices dominated much of the tech news coming out of the show. Partnerships (Nokia adopting Microsoft’s window platform 7 – WP7), more accessible social networking mobility, gaming, mobile banking and lifestyle were among the themes delivered by various keynote speakers throughout the week. 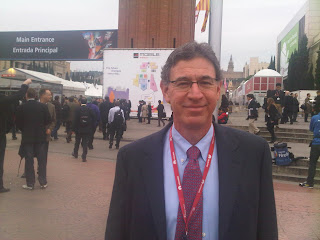 Among all the new devices, services, and applications that were unveiled and opportunities for connecting mankind in previously unfathomable ways that were envisioned over the course of the week, one underlying concern will be the challenges behind fixing the “capacity crunch” as demand continues to grow. Many conversations in the various exhibition halls were focused on this less glamorous but real problem of optimizing the use of available spectrum to support the connectivity dream.
For many of us in the microwave trenches, this eco system of user devices, cell equipment and backhaul represents our end customers. The majority of exhibiting companies that Microwave Journal readers would recognize include RF test and measurement manufacturers, front-end semiconductor and module vendors, filter and backhaul equipment providers. The high cost of exhibiting at this event may have kept other microwave categories from appearing in an official capacity, but I would not be surprised if more component, cable and connector folks were working the exhibition floor as attendees.
Day one
First meeting - Agilent. The Test & measurement powerhouse are well-prepared for their day of press and customer meetings with a presentation touching upon the past, present and future of mobile communications and their part in this unfolding story. In their booth the company was demonstrating test and measurement solutions for 3GPP LTE-Advanced, LTE, W-CDMA, HSPA+, E-EDGE (EDGE Evolution), UMA/GAN, WiMAX™ and femtocells.

With an eye on what’s to come, team Agilent is prepared to talk about the challenges of LTE-advanced. With a lock-down of features in the 3GPP release 10 standard scheduled for sometime in March, Agilent is looking to get ahead of the curve with providing test solutions. LTE-A at a glance will introduce carrier aggregation, clustered SC-FDMA (for enhanced uplink multi-access) and higher order MIMO. Several products have been enhanced for the challenges of the new standard including LTE-Advanced signal generation and analysis tools, Signal Studio and 89600B vector signal analysis (VSA) software which were shown performing both user equipment and eNB RF measurements. 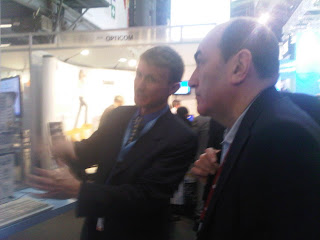