We use cookies to provide you with a better experience. By continuing to browse the site you are agreeing to our use of cookies in accordance with our Privacy Policy.
×
Home » PCIe Digitizer Cards Deliver Next-Generation Performance 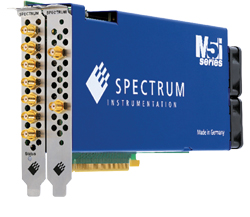 Spectrum Instrumentation has released two digitizer cards that advance the performance standards in PC-based instrumentation. Using the latest 12-bit analog-to-digital converter (ADC) technology, the cards sample signals at rates up to an impressive 6.4 GSPS. Also differentiating them is the capability to transfer enormous amounts of data over the PCIe bus. Using 16-lane, Generation 3 technology, they stream acquired data at an astonishing rate of 12.8 Gbps. This speed, almost 2x greater than other PCIe digitizers on the market, means they can continuously run at the full 6.4 GSPS sampling rate and seamlessly send acquired data to the PC environment in real time. Once at the PC, the data can be stored or processed using the latest CPUs and CUDA-based GPUs.

The two new digitizer cards are a single-channel 6.4 GSPS card (M5i.3330-x16) and a dual-channel card (M5i.3337-x16). The dual-channel model, shown in Figure 1, offers synchronous 3.2 GSPS sampling on both channels or the full 6.4 GSPS on a single-channel. Designed to handle a wide variety of signals, the digitizer designs use fully functional front-end electronics with > 2 GHz bandwidth, programmable full-scale ranges from ±200 mV to ±2.5 V and variable offset. 12-bit ADCs provide exceptional dynamic range, 16× greater than 8-bit digitizers and most digital oscilloscopes. This higher resolution improves the precision of voltage measurements and enables users to capture and characterize fine signal details often missed by lower resolution devices. 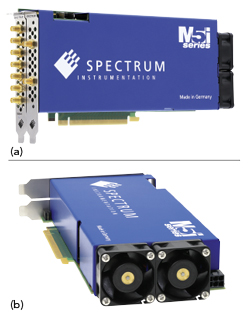 Figure 1 Front-side (a) and back (b) views of the dual-channel digitizer card (M5i.3337-x16), which performs synchronous 3.2 GSPS sampling on both channels or 6.4 GSPS on a single channel. 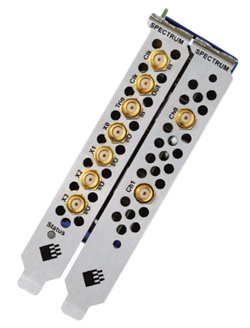 Large on-board memory enables capturing long and complex waveforms. A 4 Gb (2 GS) memory is standard, and it can be optionally expanded to 16 Gb (8 GS). A PLL-based internal clock, with better than 1 ppm accuracy, ensures precise timing measurements over long periods. Waveforms can be acquired in single-shot and multiple recording modes, together with trigger time stamping. Multiple recording divides the on-board memory into segments and supports the acquisition of numerous events, even at very high trigger rates. This is well-suited for situations found in systems using a stimulus-response process, such as radar and LiDAR, or when bursts of information must be acquired, such as testing a fast serial bus. For added flexibility, the on-board memory can be used as a FIFO buffer for continuous streaming of data to the PC environment or as a ring buffer, working much like a conventional oscilloscope.

To make integration into a test system fast and simple, the front panel has SMA connectors for the channel inputs, clock and trigger inputs and outputs and four multi-functional digital I/O lines (see Figure 2). The extra clock and trigger connections enable synchronizing the cards with other measurement devices. The cards can be installed in nearly any Windows or Linux PC using most popular programming languages: C, C++, C#, Delphi, VB.NET, J#, Python, Julia, Java, LabVIEW and MATLAB. Each card comes with a software development kit containing all the necessary driver libraries and programming examples. Alternatively, for users who don’t want to write code, Spectrum offers SBench 6, a powerful graphical software with a host of capabilities for card control, data display, analysis, storage and documentation.

The M5i.3330-x16 and M5i.3337-x16 digitizer cards are available now with delivery four to six weeks after receipt of an order. Like all Spectrum Instrumentation products, the cards have a five-year warranty and free software and firmware updates and customer support by the engineering team for the lifetime of the product.

Multi-Channel AWG and Digitizer in One Box