We use cookies to provide you with a better experience. By continuing to browse the site you are agreeing to our use of cookies in accordance with our Privacy Policy.
Home » Improving Linearity of a Doherty Power Amplifier with a Dual-Bias Structure

A novel dual-bias circuit structure increases a power amplifier’s video bandwidth while reducing the memory effect, thereby improving its linearity. A Doherty power amplifier (DPA) operating in the 5G communication band (3.4 to 3.6 GHz) and incorporating this circuit achieves a saturated output power of 43 to 44 dBm with a saturated drain efficiency greater than 70 percent. Drain efficiency is 51 to 55 percent at 6 dB power back-off and greater than 43 percent at 8 dB back-off. As output power reaches 42.7 dBm, the adjacent channel leakage ratio (ACLR) is less than -46 dBc combined with digital predistortion (DPD).

VBW plays a significant role in the operating bandwidth of the PA and affects the degree of DPD correction.6 If the instantaneous signal bandwidth is very close to the VBW, PA linearity is seriously deteriorated and is difficult to correct with DPD.7,8 It can also cause large voltage and current offsets in the active device, resulting in high internal temperatures and component damage. 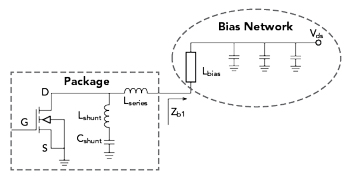 Several methods to decrease the memory effect and enlarge VBW have been proposed.9,10 Ladhani et al.9 obtained wider VBW by directly connecting series resonant circuits to the gate and drain electrodes of a transistor die in a package. This method is based on the design of the transistor current plane and is not suitable for practical circuit design. In addition, an LC resonant bias network has been proposed to diminish baseband impedance for reducing the electrical memory effect;10 however, the harmful effect of this method is that the fundamental impedance decreases while reducing the baseband impedance. The smaller fundamental impedance causes RF power to leak into the bias circuit. Furthermore, lumped-parameter components with large parasitic elements are difficult to use in RF circuits.

This article describes a high efficiency and high linearity 3.4 to 3.6 GHz DPA with a novel dual-bias network structure to broaden the VBW and minimize memory effects in a wideband DPA when transmitting a 20 MHz A-LTE modulation signal. With the addition of linearization technology, this DPA exhibits good linearity and high efficiency.11-16

In modern communication systems, wide bandwidth and multi-carrier modulation have been used for high speed data transmission. Nevertheless, the modulation signal bandwidth is limited by RFPA VBW. VBW depends mainly on the equivalent LC resonance of bias networks and transistor internal matching. Figure 2 is the equivalent circuit model of a transistor and a typical bias circuit. The equivalent resonant frequency can be expressed as: 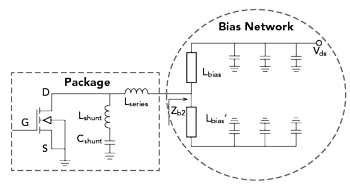 In general, Lbias is higher than Lshunt and Lseries by more than two orders of magnitude. So, Lm ≈ Lbias. Therefore, widening of the VBW can be achieved by reducing the equivalent inductance of the bias circuit.

Where Zb1 and Zb2 are the drain bias impedances in Figures 2 and 3, respectively. Because the drain node impedance of the dual-bias network is half that of the typical bias circuit, baseband impedance is reduced and the memory effect improved.

Lbias and Lbias‘ in Figure 3 are λ/4 microstrip lines with equivalent parallel inductance of 1/2 Lbias. The equivalent resonant frequency is: 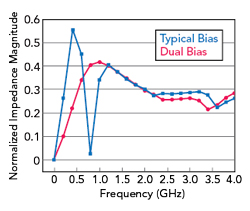 Figure 4 Simulated impedance vs. frequency of the typical and dual bias circuits.

The Cree CGH40010F transistor is used as an example. At a center frequency of 3.5 GHz, the transistor equivalent model is analyzed and the λ/4 microstrip lines equivalent inductance is calculated. Lshunt and Lseries are lower than Lbias by an order of magnitude; therefore, Ln can be expressed as: