We use cookies to provide you with a better experience. By continuing to browse the site you are agreeing to our use of cookies in accordance with our Privacy Policy.
×
Home » 125 MSPS AWGs for Cost-Effective Multichannel Signal Generation 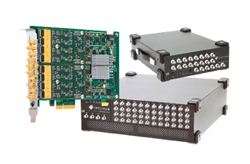 Spectrum Instrumentation has released a line of arbitrary waveform generators (AWG) with exceptional multichannel capabilities. The AWGs of the 65 series are available as PCIe cards (M2p.65xx, with eight versions), LXI/Ethernet instruments for mobile use (DN2.65x, with six versions) and in a rack format (DN6.65x, with eight versions). They feature precision signal generation using the latest digital-to-analog converter (DAC) technology. Each channel has its own DAC with 16-bit resolution and output rates up to 125 MSPS for generating signals with frequency content from DC to 60 MHz.

The small PCIe cards are available with one, two, four or eight channels. Plugging one into any PC with a vacant PCIe slot turns it into a versatile signal source. Using Spectrum’s Star-Hub option, multiple cards can be connected to create unique AWG systems with up to 80 fully synchronized channels in one PC - a cost-effective solution for multichannel applications. The 14 different stand-alone units have similar capabilities, offering four to 48 channels. Full remote control is enabled via an Ethernet connection to any PC or local area network, for easy integration into almost any test system.

Standard features include on-board memory of 512 MSPS per card, up to ±6 V output swing, exceptional dynamic performance and a variety of operating modes for generating long and complex waveforms, including FIFO streaming. The AWGs come with all the tools necessary to generate an unlimited variety of waveforms. Spectrum’s SBench 6 Professional software controls the units from a simple, easy-to-use graphical user interface and handles waveform creation, data analysis and documentation. Alternatively, users can write custom control programs in most any popular programming language, including MATLAB and LabVIEW.