We use cookies to provide you with a better experience. By continuing to browse the site you are agreeing to our use of cookies in accordance with our Privacy Policy.
×
Home » AWGs Crunch Size, Deliver Performance

The new AWGs offer sampling rates of 40, 80 or 125 MSPS, and every channel has its own DAC and output stage. The outputs are designed for accuracy and flexibility, incorporating four switchable filter paths to optimize signal quality and output swings to ±6 V into a high impedance load (1 MΩ) or ±3 V into 50 Ω.

For generating long and complex waveforms, the cards are equipped with a generous 512 MS on-board memory. The memory can be segmented and waveforms created by looping on and switching between different memory segments. A first-in, first-out (FIFO) streaming capability enables new waveform data to be transferred over the fast PCIe x4 bus at rates up to 700 Mbps while stored information is being replayed. This makes FIFO streaming ideal for creating ultra-long single-shot waveforms or constantly changing burst type signals, commonly found in radar, ultrasound, LiDAR or sonar systems. The signal generation possibilities are virtually limitless.

Figure 1 The new AWGs match with Spectrum’s digitizers for stimulus-response and closed-loop testing.

For applications requiring the connection of AWGs and digitizers, for stimulus-response or closed-loop test systems, Spectrum’s Star-Hub piggyback module can synchronize up to 16 M2p-class products. The new M2p.65xx AWGs match perfectly with the M2p.59xx 16-bit digitizers, which were released in 2018 (see Figure 1). The M2p.59xx digitizers offer one to eight channels with sampling rates between 20 and 125 MSPS. With Star-Hub distributing a common clock and trigger signal to each channel, it is simple to build systems with up to 128 fully synchronous channels - perfect for situations where multiple test points or arrays of sensors need to be stimulated by different test signals at the same time.

Spectrum also offers its own software, SBench 6 Professional, which controls all card modes and settings using a simple graphical user interface. It supports multi-channel operation, waveform display, signal generation, data analysis and documentation. A built-in EasyGenerator function can be used to produce waveforms like sine, triangle or rectangle, with selectable frequency, amplitude and phase. More complex signals can be created using mathematical equations or imported data from other programs or devices, such as digitizers or oscilloscopes, using binary, ASCII or wave formats. 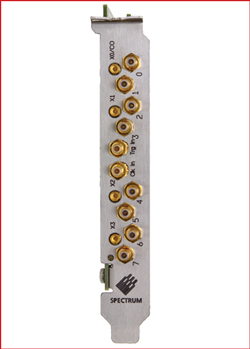 To allow fast integration into almost any automated test system, the cards come with a high level of connectivity (see Figure 2). The clock and trigger inputs and signal outputs are provided via SMB connectors on the front panel, which also hosts four MMCX connectors (one multi-function output and three multi-function I/O lines). These can be used for tasks such as additional synchronous digital output channels, clock, trigger or status output, as well as asynchronous I/O lines.

Switching the multi-purpose I/O lines to digital outputs adds another four synchronous output channels to the AWG, making it possible for a single AWG card to generate up to eight analog outputs and four digital outputs in parallel at full speed. It is a helpful feature when interfacing with other equipment for controlling experiments or OEM projects.

The new M2p.65xx series AWGs are available for immediate delivery. All cards are shipped factory tested and include software drivers, working examples and a base version of Spectrum’s SBench 6 software for initial testing. The cards are backed with an industry-leading five-year warranty with software and firmware updates, free of charge, for the lifetime of the product.