We use cookies to provide you with a better experience. By continuing to browse the site you are agreeing to our use of cookies in accordance with our Privacy Policy.
Home » NYU WIRELESS Founder Comments on FCC Race Toward 6G Wireless Communications
Industry News Today, The Federal Communications Commission begins considering opening up a new spectrum of radio waves that researchers believe could become integral to the sixth generation of wireless communications (6G) as part of the never-ending quest to send more data more quickly over the air.

The FCC chairman invited the researcher who demonstrated that millimeter waves – originally believed to be too short to become useful for mobile devices – to explain the technology behind the even shorter, terahertz, spectrum. Theodore (Ted) S. Rappaport  is a professor at the NYU Tandon School of Engineering, founder of the leading academic research center NYU WIRELESS, and the person who first demonstrated the potential of the millimeter radio wave spectrum.

Today, he addresses the FCC Open Commission Meeting as commissioners consider adopting rules to make available 21.2 gigahertz of spectrum above 95 GHz for unlicensed operations and create a new class of experimental licenses for the 95 GHz to 3 THz spectrum range. (ET Docket No. 18-21; RM-11795).

The FCC explained the reason it is examining opening access to these even-shorter radio waves:

Airwaves above 95 GHz have long been considered at or beyond the outermost edge of usable spectrum. However, the Commission has seen an uptick in interest in conducting experiments using such spectrum and the inclusion of these frequencies in rulemaking petitions. We presently have no rules to permit licensed or unlicensed communications in this region of the spectrum, other than by amateur operators or on an experimental basis. As a result, the Commission has been studying ways to provide attractive opportunities for technology development that will promote the deployment of new services and devices in this spectrum and keep the United States at the forefront of wireless innovation. 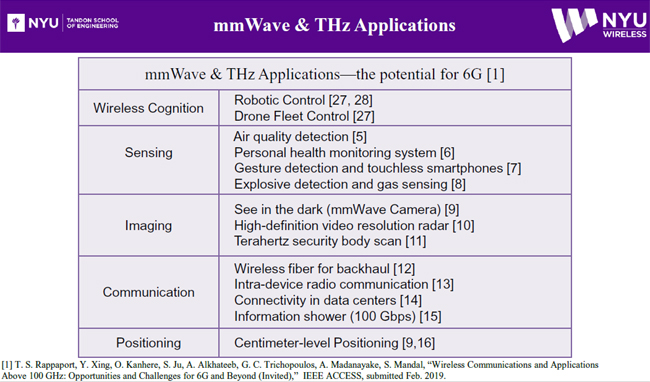 NYU WIRELESS is already doing channel sounding tests at 140 GHz to lay the ground work for these higher frequencies like that did for 5G for lower mmWave frequencies (such as 73 GHz). Here is an image of the some of the students and setups being used for these experiments: 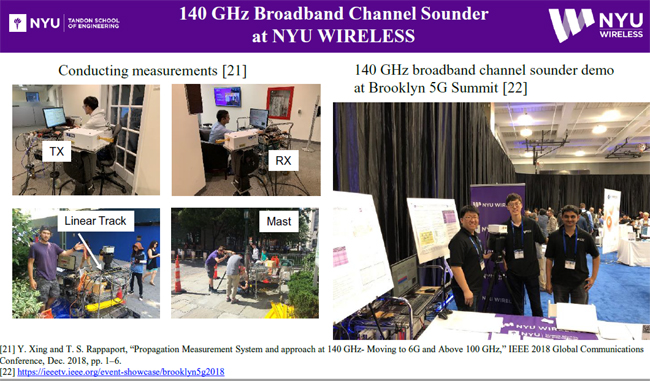 "I am honored to be invited by FCC Chairman Ajit Pai to be part of the historic vote to open up spectrum above 95 GHz for the first time in the history of the United States.

"The vision and hard work by  Chairman Pai, the commissioners, the FCC staff, and past work by Chairman Thomas Wheeler have kept the United States on the cutting edge of 5G, ensuring that our country will enjoy the vast applications and efficiency it will provide. Now, with the Spectrum Horizons initiative and this historic vote, the FCC has launched the race to 6G, helping to ensure the United States will play a leading role in future generations of wireless.

"President Trump mentioned 6G a few weeks ago - perhaps the first world leader to do so. As an engineer and educator, I'm happy to know our country's leaders are working to support American competitiveness in science, technology, engineering, and mathematics (STEM). STEM and engineering research are so vital for our country's economic future, and it needs attention like the President gave to 6G."