We use cookies to provide you with a better experience. By continuing to browse the site you are agreeing to our use of cookies in accordance with our Privacy Policy.
×
Home » State-of-the-Art Custom Duplexers 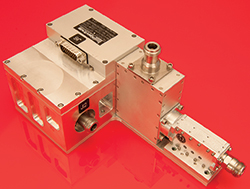 High power duplexers, developed and manufactured by Spectrum Elektrotechnik GmbH, operating in L-Band and S-Band are always built to customers’ electrical, mechanical and environmental specifications. These units are capable of managing peak transmit power of several kW and long pulses.

When a customer requires a high power duplexer the first decision to be made is on the size and the space the duplexer is allowed to occupy, along with its maximum weight. The next is to specify the exact location of the RF connectors and signal connectors. Devising the most meaningful and effective layout can be complicated and standard connectors at internal connections cannot usually be used. This is where Spectrum can use its expertise to design very specific connections between components. One of the most unique adapters the company has produced, a double right angle, input and output at several degrees tilted, and with a newly designed interface is shown in Figure 1.

This is just one example of the customized duplexer design service offered by the company, which has in-house engineering design centers designing the components required, manufacturing all parts at the numerous CNC centers, and assembly and full testing under the required environment. Also, all the PC-boards are designed by the company, including in-house pick and place, and testing. All of which enables fast response to the customer’s specification.

When customizing Spectrum considers all aspects of the duplexer’s make-up, specification and applications, paying attention to all the criteria that would impact the product’s design and performance. 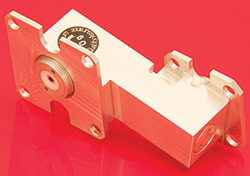 The classic function of a duplexer is such that the transmit signal enters the circulator, passes through a coupler to the antenna. The receive signal passes through the coupler in the opposite direction, through the circulator to the limiter, while the limiter operates as receiver protection. It needs to provide active limiting capability, triggered with or without a control signal during transmission, and also have passive limiting capability during receiving periods in order to protect the receiver against jamming signals or unwanted reflected signals of high power caused by close objects. The limiter will reject these unwanted signals back into the circulator, which will then lead it to a load, consuming the undesired power.

The duplexer’s limiter is the most complex and critical component. In order to operate peak power levels of several kW, a circuit has to be designed using a number of diodes in absolute parallel connection, guaranteeing that every diode receives the same power for equal stress.

In most duplexer specifications Spectrum designers take specific key parameters into consideration. This includes low loss between transmitter and antenna while transmitting and high isolation from transmit to receive mode as well as low loss between antenna and receiver. Figure 2 shows a customized duplexer designed with mechanical and electrical performance as specified by the customer. 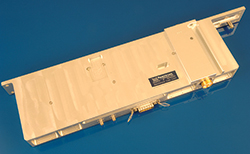 Important too is fast response circuitry, indicating that the power incident to the limiter stage exceeds the operational limits, activating a signal and providing the system with a message that the transmit power is to be reduced. Should the limiter fail, a signal must be generated so that the system can immediately turn off the transmitter.

A feature is that the limiter’s switching response reaches the specified attenuation and the recovery response from full attenuation to a specified level of the insertion loss in a very short time. When activated the attenuation of the limiter at any frequency across the whole operating band needs to provide full protection with or without DC power.

Another consideration when customizing duplexers is that the flat leakage of the limiter towards the output port and certain test ports must not exceed a specified power level for a given characteristic of the input signals. The spike leakage must be limited independent of all specified load conditions of the antenna.

It is important for the duplexer to operate in all conditions within any environmental case specified and must have an over temperature sensor that indicates when the maximum operating temperature of the components has been reached or exceeded. Usually two signals are supplied, ‘OK’ means operating within allowed limits, and ‘Fail’, indicates that the allowable temperature limits have been reached.

To ensure the correct operation of the unit the input power supply of the duplexer needs to be monitored and a signal sent to the network to indicate a loss of the supply power, or that the voltage has exceeded the allowed tolerance levels, etc.

Also, the duplexer should always monitor its presence in the system, sending signals to the control center to indicate its readiness for operation, or when the transmitter is failing or disconnected. The control and interface unit within a duplexer consists of complex circuitry, which, due to volume restrictions, is usually designed on several PC-boards, combining to form a complex network.

Finally, the duplexer must be able to operate in harsh environments, and withstand mechanical shock, acceleration and bumping during transportation and storage without degradation.

Scanning Atoms with the Tip of a Needle