We use cookies to provide you with a better experience. By continuing to browse the site you are agreeing to our use of cookies in accordance with our Privacy Policy.
Home » Blood pressure raised at ARMMS conference
European Industry News Industry News

Using 868 MHz RF technology to measure blood pressure in the heart’s left ventricle was a highlight of the ARMMS RF & Microwave Society November Conference, held near Cambridge, UK. Olive Murphy of Imperial College London explained the technique, which involves placing a SAWF resonator and antenna within the heart. When perfected the method can be used to continuously monitor the heart by use of a body worn patch antenna and associated transmitter and receiver to interrogate the device. Olive won the £250 Steve Evans-Pughe prize for best speaker, sponsored by AWR which was decided by popular vote of the delegates, together with a book of her choice from Artech Books.

Terahertz frequencies are an unexplored part of the EM spectrum in the 100 GHz to 10 THz range. One ubiquitous application exists in the form of passive infrared (PIR) detectors, but many other opportunities are now emerging. Stepan Lucyszyn, also of Imperial College London accurately summarised the challenges of exploiting terahertz technology.

Laminate PCB technology is now routinely used for the realisation of low cost subsystems operating at frequencies up to around 40 GHz, which has been made possible by the wide availability of microwave components in SMT compatible packages and low cost, high performance laminate PCB materials. Liam Devlin of Plextek RFI offered guidelines and useful tips for optimising the performance of SMT based laminate PCBs operating at microwave frequencies. 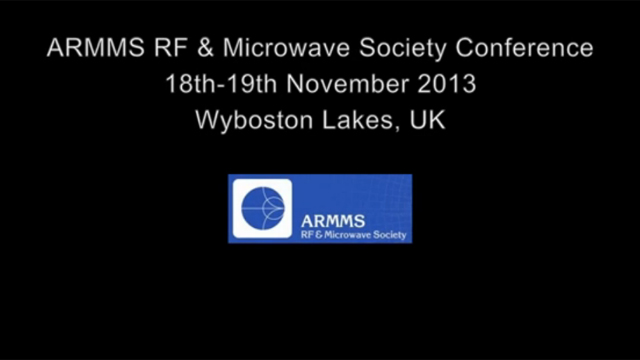 Microwave Journal readers will have read about the development of 3D Smith charts in an article by Andrei Muller of the Telecom Institute of Valencia last year. At ARRMS he presented a paper on the applications of the chart by means of a completely updated 3D Smith chart tool issued in September 2013. It is capable of dealing with both active and passive microwave circuit parameters simultaneously.

Demonstrating the diversity of the conference Kenneth Tong of University College London considered how golf umbrellas could be used to expand the coverage of cellular networks. He showed that low cost solar cells, antennas and batteries can be incorporated into a ‘brolly’ to enhance mobile networks in Africa.

In total fourteen papers on a great variety of subjects were presented including three by younger engineers. Jonathan Rawlinson presented his radio astronomy results that included images of the sun at Ku band. Jonathan will begin his technical education next year with a place at Surrey University to study physics and satellite technology.

The RF & Microwave Conference is known as a very good networking event. This aspect was enhanced by the trade exhibition with twenty exhibitors including live demonstrations. Interlligent RF and Microwave Solutions exhibited and sponsored the conference, which was appreciated by the committee, as ARMMS is a non-profit organisation run by volunteers. Networking continued over dinner, which has proven to be a convivial and productive occasion.