We use cookies to provide you with a better experience. By continuing to browse the site you are agreeing to our use of cookies in accordance with our Privacy Policy.
×
Home » Wireless Communications in the Massively Broadband® Era

As the cellular industry rolls out fourth-generation Long Term Evolution (LTE) across the world, one has to believe that we are witnessing the dawn of an amazing new era, where wireless becomes so pervasive and intertwined with everything we do in life, just as the pen and paper are today. We are at the dawn of the Wireless Renaissance. Since I wrote “The Wireless Revolution” article for the IEEE’s Communications Magazine in 19911, we have witnessed the transition from first generation analog FM cellular phones, operating at carrier frequencies of 850 MHz, to today’s 4G LTE devices and smartphones with download speeds that will, in a year or two, approach 500 Megabits per second at carrier frequencies of approximately 2 GHz. With multi-gigabit per second, 60 GHz Personal Area Networks (PAN) now available under the IEEE 802.11ad standard and the WiGig and Wireless HD labels, the ability to retrieve from the cloud all of the content in our lives within seconds is now a reality. What is more, the required engineering know-how needed to catapult wireless to its renaissance is being born in these new LTE and 60 GHz technologies. But as awesome as the capabilities of LTE and 60 GHz Wireless LAN are, these are simply cumbersome first steps toward what the future holds in the coming decade.

Truth be told, our modern wireless technologies are only a shell of what we should expect, given the past advances of the computing and semiconductor industries and the abundance of untapped spectrum above 3 GHz. In 1991, many of us were learning about the new field of wireless mobile communications, while the PC industry offered personal computers with clock speeds of approximately 10 MHz and memory sizes of 10 megabytes. Today, when considering the parallelization of multi-core processors, both the equivalent clock speed and memory size of a mid-range PC have increased by three orders of magnitude – a factor of 1000 – and the consumer pays less than half the price for today’s more powerful PC, adjusting for inflation. Yet, over the same 22 year period, the carrier frequencies used by the cellular industry across the globe have advanced from 850 MHz to only about 2 GHz, not even approaching one order of magnitude increase in frequency. Today’s low-cost CMOS circuitry can be made to operate with an ft of 1 THz, meaning that cellphones and WLAN devices can now operate at many tens or hundreds of GHz, orders of magnitude greater in carrier frequency than today’s commercial devices. Such an increase in carrier frequency brings with it a similar increase in useable bandwidth, thus allowing future mobile or PAN services to have many orders of magnitude greater raw bandwidth (and capacity), as well. By proportionally increasing the carrier frequency (that is, decreasing the wavelength) and increasing the spectrum bandwidth available for future mobile devices, these future millimeter-wave systems will exploit new high gain, electrically steered, integrated antennas to find the best signals in a mobile environment, while being physically no larger than a fingernail or as small as a human freckle, as carrier frequencies approach a few hundred GHz. 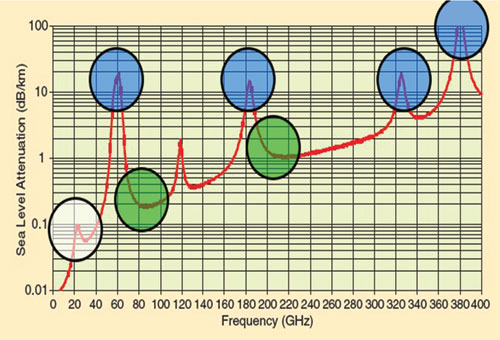 Consider this — the contiguous spectrum of every commercial wireless service known to man (such as satellite, cellular, Wi-Fi, broadcast television, FM radio, amateur radio, etc.) easily fits within the bandwidth of today’s 60 GHz unlicensed band. It is hard not to be giddy about the emerging impact of such massive transfer rates, as carrier frequencies begin to ramp up to take advantage of today’s semiconductor capabilities3 (see Figure 1). As this Massively Broadband® era is reached, incredible bandwidth and spatial steering of radio waves will be new dimensions that can be traded with power to yield unparalleled flexibility and power efficiency, allowing revolutionary form factors for everything we enjoy today, such as  laptops (where the magnetic or electronic hard drive will become a high speed tetherless device you can carry in your wallet or clothing), vehicles (where the control wiring harnesses and connections in cars are replaced with broadband wireless interconnections operating in the “whisper radio” band of 380 GHz (see Figure 1), making cars less expensive to build and lighter weight with better gas mileage), to data centers (where today’s expensive optical or fiber interconnects are replaced with wireless transceivers to enable unprecedented deployment flexibility with less cost and power). This unparalled spectrum will unleash revolutionary uses of our cellphone, and will enable new concepts in the home, such as the “information shower,” where all of your past and present content in your life is downloaded to you as you walk from the living room to the bedroom. This wireless “peace dividend” spawned by investments and advances in the semiconductor and computing industries, and new advances in miniature on-chip and in-package antennas, integrated beam formers and continued advances in spatial processing, will bring about the renaissance of wireless communications, as the copper wire is relegated to the important job of carrying power to increasingly efficient devices that are wirelessly interconnected. This renaissance will also bring the cloud to our cellphones,  wireless into the operating room of hospitals, medical and patient care, homes and vehicles, and telepathy (yes, telepathy, where wireless monitoring of the brain has been shown to deliver 3 bits/second telepathy rates today — and we expect these rates to ramp dramatically, following in the footsteps of cellular). To study these areas and more, a new research center called NYU WIRELESS has been created at NYU and NYU-Poly (formerly known as Brooklyn Poly and now the engineering college of NYU). At NYU WIRELESS, a focus on wireless communications, computing and medicine combined with nearly $10 million in investment, has brought together researchers and students in an unparalleled collaborative environment, with access to the world’s leading wireless, computational and medical researchers. Our recent pioneering work on urban multipath propagation at NYU WIRELESS shows that at the millimeter-wave frequencies of 28 and 38 GHz2, cellular phones using adaptive antennas will actually be more reliable than today’s 2 GHz systems, with data rates that are orders of magnitude greater than LTE’s greatest plans. Our work also shows that for cell radii of two hundred meters in New York City and Austin, Texas, neither urban propagation nor rain is an issue whatsoever. Other universities, such as MIT and the University of Surrey have also recently launched centers to investigate aspects of future wireless networks.

For the renaissance of wireless to take hold, the first step will be to enable ubiquitous multi-gigabit per second data rates to cellphones of the future. Carriers using LTE will not realize this in today’s low microwave bands that are currently the focus of spectrum regulators, but 5G will enable this, if the millimeter-wave bands are opened up to mobile usage. Governments around the world should make this millimeter-wave spectrum available without delay, and should begin to contemplate much larger spectrum allocations, on the order of several GHz bandwidths as shown in Figure 1. While governments attempted to do this with LMDS spectrum at 28 and 38 GHz in the late 1990s, the spectrum availability at that time was far ahead of the capabilities of semiconductors, and electronics were too costly. Today, however, the world is different, as the move to 60 GHz PAN and 77 GHz automotive electronics are creating the reservoir of technical experts needed to bring wireless into its renaissance. As massive spectrum allocations in the mmWave bands begin to provide a playing field for the modern capabilities of wireless devices using state-of-the-art CMOS circuit designs, computing and signal processing, all of us will soon experience such amazing data transfer rates and new wireless applications that promise to transform our lives in ways that few could have imagined in 1991.

NOTE: Massively Broadband is a registered trademark of the author.

The Use of Broadband Military Antenna Technology in Modern Communications Systems